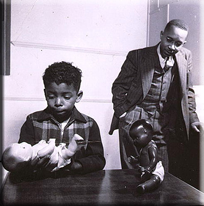 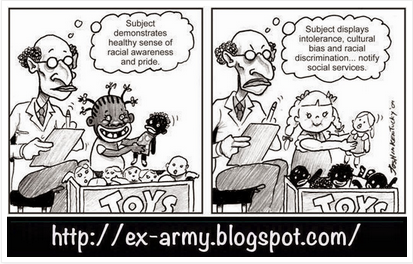 Because of our society's racist legacy (slavery, jim crow), our communities are severely psychologically damaged, and we've been passing that damage down through our descendants. The black communities demonstrate inferiority complexes over it, and the white communities demonstrate superiority complexes over it. This ex-army toon is perhaps showing a weak attempt to cure the imbalance by swinging the pendulum in the other direction, but I doubt any such attempt is actually going on in real life. Poorly thought out band aid measures like the broken 'Affirmative Action' policy have proven to be abysmal failures.

Rex May - No. Tests show that Black Americans have higher self-esteem than White Americans.

Muhammad Rasheed - That's interesting, considering the doll test shows the exact opposite of that. I'd love to see those tests. What are they called?

Rex May - Here's a reference to start from. Actually, it's hardly surprising, because the last few generations of Blacks in America have been taught that their shortcomings are due to White racism, and White kids have been taught the same thing, and told that they ought to feel guilty about it. The results are to be expected. Black-White Differences in Self-Esteem

Muhammad Rasheed - According to the page you posted, Rex, the illusion that blacks possess a higher self-esteem than whites is projected when a very specific questionnaire form is used (Likert), and that when the questioning is controlled, the illusion vanishes, revealing what the doll test showed all along.

The questionnaire discrepancy was caused by response styles between the two groups, not a high self-esteem in the blacks.

Muhammad Rasheed - What else do you have?

Rex May - This, and the link at the end: Black Self-Esteem - Ex-Army Blogspot

Muhammad Rasheed - Both of these are just opinion pieces, Rex. In fact one of them begins "Obama failed" after only a year into his first term.

Do you have any more scholarly treaties and/or test results that proves these guys’ claims?

Nicholas Stix wrote: "The real story behind the myth of black self-esteem is that narcissism runs rampant among blacks, and that the racial fairy tale about low self-esteem was concocted, like virtually all racial fairy tales, in order to collectively defame whites, and portray blacks as whites' victims."

So slavery and jim crow were only myths? Do you believe this?

Ex-Army wrote: "Look at the pictures of Trayvon preening in his thug outfit. Dumb as a box of rocks, violent, dishonest, and very likely a burglar, Trayvon thought he was the cat's pajamas, far superior to intelligent, prudent, honest people."

Trayvon was a teenager, "preening" in his youthful teenager clothing. Like a teenager.  Do these posts really reflect your own views, Rex?
Posted by M. Rasheed at 4:07 PM