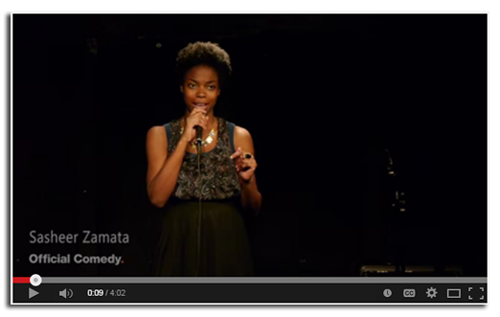 Muhammad Rasheed - [in response to ugly YouTube comments] I thought she was funny, charming, and very insightful (I thought the dig at Perry in the end was unfair though). Humor is subjective; there is no such thing as "universally funny." Even the Top Ten most celebrated comedians only have a percentage of the populace as their fans. It really doesn't mean anything to say you don't think a comedian isn't funny. Other people do.

bestdeathfan - I hate when people like comedians make jokes about how someone is trying to have them sound or do something "black" like the stereotypes of black people talking in Ebonics is false, even when the majority of us know its true. Its in the same vein as black people ignoring the statistics of what their people do as a whole and using that as fuel to their racist america narrative.﻿ ﻿

Muhammad Rasheed - The point of a stereotype is that it tries to say all of the people of that group are like that. Like "all white people are incestuous trailer park dwellers with bucked teeth." You can find some people like that, but it doesn't describe them all. That's why stereotypes are wrong.﻿