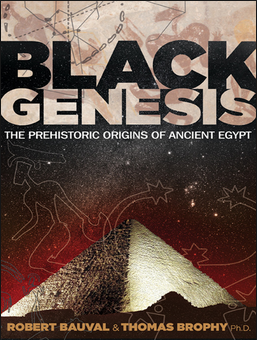 A caucasian friend of mine saw the title of this in my office and dismissed it, thinking it was yet another afrocentric rant or something, but I don't collect those. Black Genesis was written by Robert Bauval (he's French/Greek or something like that and born in Egypt) who is a top-notch scholar. The book shows the truly ancient remains of a people who lived and thrived on the African continent during a time period when the Sahara Desert was fertile. Paintings of people and tropical animals on boulders in the currently 100% inhospitable areas of the legendary desert lands, as well as megalithic structures that, as usual, line up with the stars from some ancient date far back on the Precessional long-count calendar. This is the data that goes hand-in-hand with the work of Ivan van Sertima and Cheikh Anta Diop representing more pieces of the puzzle of the mysterious past of the ancient human being.

This is actually a wonderful book for people genuinely interested in examining the clues of ancient prehistory, which presents data greatly in need of more dedicated professional archaeologists to build upon … honest truth seekers, who are not half-blinded by institutionalized agendas, and over-biased ideologies to block the way.
Posted by M. Rasheed at 3:52 PM