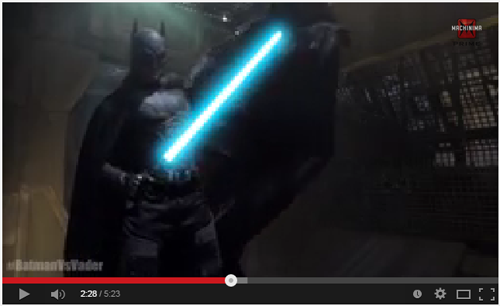 Muhammad Rasheed - This was very fun, but the lightsaber battle lasted too long, I think. The problem is that when two Jedi fight, it isn't a sword fight, it's a Force fight; the Force partially controls their actions, remember? The skill involved has very little to do with melee weaponry mastery, but instead a battle of wills in mastery of Force demonstration. The Force, as wielded by Darth Vader, would've cut Batman the fuck in half.

Muhammad Rasheed - I WAS going to ask "How the hell did Batman & Superman even GET there?" but then I remembered it was DC. Obviously it was Pre-Crisis.

Muhammad Rasheed - Also it must've been the original "jumps really high but can't fly, bullets sting a little" Superman they captured, right? The one that fought the "War of the Worlds" martians in that one story?

Jeremy Travis - Were you NOT paying attention? Vader couldn't use the Force during the battle because he was using to keep himself alive after the EMP knocked out his breathing apparatus. They even stated that in the resultant dialogue.

Muhammad Rasheed - You're referring to Batman's "Better focused on you than me" line, but Vader immediately activated his lightsaber and said Batman had underestimated him.

Todd Holland - Yeah...I found this one laughably pathetic...Created by "Bat-Fanatics" who continually overestimate their billionaire ninja...Norms don't do well against force users especially one on one...They die,and die quickly The Nemoidian at 5:41 says it best. The Phantom Menace - Opening Scene

Jeremy Travis - No, Muhammad, I'm referring to Vader's "The Force will sustain me long enough". It's why Batman stood THAT much of a chance, and why Vader didn't just snap his neck like in the final scene, because all of his Force ability was focused on keeping his body working. It's also why, after he turned the apparatus back on, he no longer needed the light saber and went ape-shit on Bats.

John Sanford - I had a huge debate about this about 2 months ago when it first appeared. I argued successfully that a well-prepared Batman could have held Vader off until he could get to Superman. This film is made by Vader nerds who have no respect for Batman, or any real knowledge of what he could do.

John Sanford - It was a glorious nerd debate of epic proportions.

Jeremy Travis - As one can tell from my profile pic, I am a Batfan. However, I fully understand that he shouldn't be able to take everyone down in a face-to-face battle, no matter how well prepared he is. To do the Bat any kind of justice in defeating Vader, he'd have to SERIOUSLY overpower and weaken Vader from afar and over a period of time, while also staging a separate mission to free Supes in the mean time. This was clearly not supposed to be end with the Bat succeeding.

It would sustain him long enough to kill Batman before he had to go have the techs fix that apparatus.

Jeremy Travis wrote: "It's why Batman stood THAT much of a chance..."

Batman DIDN'T stand that much of a chance. The writers just wanted to show that lightsaber battle.

Jeremy Travis wrote: "...and why Vader didn't just snap his neck like in the final scene, because all of his Force ability was focused on keeping his body working."

lol No, it's because the writers just wanted to show that lightsaber battle.

Jeremy Travis wrote: "It's also why, after he turned the apparatus back on, he no longer needed the light saber and went ape-shit on Bats."

The fact that he was using his lightsaber at all meant he should have destroyed Batman right then. The Force partially controls his actions -- the "energy field created by all living things." That very energy field, that was using Vader to propel the saber blade, was also surrounding and penetrating Batman, who didn't master the Force at all.