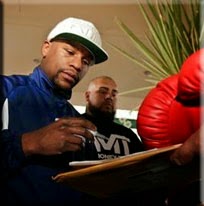 1.) In Feb 2013, Floyd Mayweather, Jr. announced his six-fight deal with Showtime/CBS in which he was guaranteed $200 million.

2.) One of the terms of that deal involved the potential to make over his $200 million base depending on such factors as pay-per-view totals, promotion efforts, Mayweather's continuing undefeated status, and "the quality and marketability of his opponents."

3.)  The first four fights in this deal had total pay-per-view bout buys as follows:

4.) Weeks ago, with only two fights left in his Showtime six-fight deal, Mayweather announced that he would like his next two fights to be against rival Manny Pacquiao, and called him out.

5.) Pacquiao's camp has reported on The Ring Magazine website that they have agreed to all of the terms presented to them by Mayweather representatives (which include the drug testing, and Floyd's preference for the 02 May date for the first fight), and only awaits his approval (although this part is actually just a Arum spin job trying to pressure the Mayweather camp).