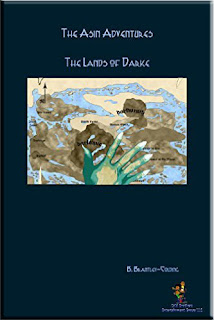 Although officially labeled a horror/sword & sorcery work, in this self-published introduction to an intended multi-book epic, Brian Colding crafts a tribute to an eclectic wide-ranging mixture of pop culture genres. Strongly appealing to the inner fanboy in this 40-something reader, it didn’t take me long to find myself engrossed in the building tale of The Asin Adventures: The Lands of Darke (Darkayne Kingdom Book 1), especially enjoying Brian’s descriptions of battles between powerful super beings. The author was clearly fondly influenced by properties that included Dungeons & Dragons (both the RPG and the ‘80s cartoon show), J. R. Tolkien’s works, favored stories from DC/Marvel comics, Godzilla films, classic martial art films & lore, as well as mythological elements from cultures around the world, and probably a whole lot of others.

Taking place in a magic-based Other World, built loosely upon a template familiar to Robert E. Howard fans, incredibly powerful, melee weapon wielding super warrior kingdoms jockey for dominance in what very well may be the final, apocalyptic battle of their violent, war-torn “civilization.” Unlike most other works similar to this, Brian’s story has a strong empathy for the superhero fantasy sub-genre, with this beginning of his wildly eclectic multi-genre epic being a delight to all of us Gen-Xrs who are fond of engaging in equally epic “What if XYZ fought ABC?!” fanboy debates! This first novel was truly great good fun. I found the battle descriptions so potent, that I wished it was a lavishly illustrated graphic novel instead of prose. This kind of work deserves that treatment since that same type of visual feast birthed it in the first place.

In addition to the battle descriptions, and his ability to play fanboy sensibilities like a finely-tuned instrument, another one of Brian’s strengths demonstrated here is his gift for turning a phrase. “Boy, you SURE talk pretty!” Often within his pages he’ll describe landscapes, or a potent being’s design to reveal the artful poetry in Colding’s soul, making me wish he did it more consistently throughout the tale. Then the book would easily transcend the tribute to genre stage into real art.

Another interesting trait I would’ve loved to see more of (and perhaps I will in future volumes!) was Brian’s generosity in allowing black-skinned, African-derived characters share the stage of high power, and even in some cases eclipse their fellows. As an African-American myself this is important to me, since poor representation in epic fantasy is one of the genre’s well-known shames. Good on you, Brian, with sincere thanks.

On the negative side of this review we have two items… one I’ll label as subjective opinion to of course take with a grain of salt as the reader likes, and the other more objective/technical. For the former, Brian reveals himself to be old school conservative in his depiction of villains, so you can tell they are the bad guys (in a story full of murderers & fiends, mind you) by their acts of sexual deviancy. Brian is quite graphic in his description of these creatures’ habits, and if the would-be reader is of the type subject to over-sensitivity when it comes to such concepts, you should prudently pass on this book. For the latter negative item, this book suffers from what self-publishers typically do: Not enough proofing/editing before it goes into distribution. I can certainly imagine the excitement and eagerness he must have felt trying to get the first title of a long-time gestating epic work finally out to the masses, but it is very important to devote publishing resources towards professional proofing/editing services to make sure the work is RIGHT before it gets into reader hands. It’s not too late, of course. Now that the novelty of being published has worn off, I would suggest tweaking the text by paying a fresh set of eyes to comb through it, and then re-upload the file to the printer. Too easy, and well worth the effort. Better late than never, too.

In closing, I am very impressed with The Asin Adventures: The Lands of Darke thus far, and was highly entertained throughout. I genuinely look forward to the next exciting part in the saga. Keep ‘em comin’!