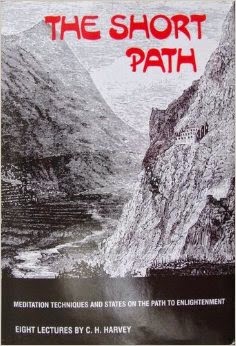 Clesson H. Harvey's Short Path is the companion to his website pyramidtexts.com. Composed of a series of assembled lectures he conducted on the topic, it is mostly an autobiographical sketch of his life showing how after years of studying the meditative practices of the different cultures from all over the world, he discovered that the actual point of meditating in the first place is not general knowledge. The source of the world's meditative practices are the Pyramid Texts themselves. Called "The Book of Coming into Light" these writings show how, through correct meditation, one can open the Third Eye and achieve Enlightenment. The Short Path tells how C. H. Harvey acquired the knowledge, his studies on it, and his detailed account of the actual spiritual "sights" encountered when you first open the eye. Because he is a physics professor from a big university, writes in a very no nonsense, no mystic metaphors type style. He's not trying to be spiritually "deep" with you. He just wants the reader to one, two, three get the facts about becoming enlightened. I HIGHLY recommend this to folks who are seeking the Truth in spirituality.

See Also:
Awakening the Atrophied Eye: A Personal Quest to Find the Followers of Second Sight
Posted by M. Rasheed at 7:46 PM