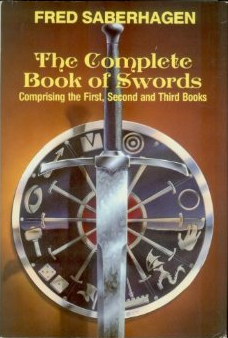 The Complete Book of Swords by Fred Saberhagen combines the main series of the author’s Sword Books together in one convenient and handy volume.  Taking place in the far future of one of his other popular series, it features magic in a fantasy setting, where remnants of technology from our era are found in the land the way relics from Atlantis would be in a traditional fantasy tale.

The titular swords are magic talisman’s of awesome force, and are the most powerful items in the story. Literally 'forged by the gods,' they function like characters themselves, with all the other characters desperately jockeying for position to capture the blades for their own political advantage. Personally I found the story to be somewhat dull unless the swords were in the scene, which would cause me to immediately perk up in excitement, especially when Saberhagen would introduce a new one. This basically functioned to manifest in me not particularly caring for the plot or the other characters; I just read it for the swords and their remarkable powers, which were as follows:

1.) Townsaver, the Sword of Fury - Him what wields it is irresistible in battle. The spell activates whenever an enemy even threatens, and the sword will lash out and destroy the offending flesh. Its weakness is that it will do absolutely nothing to defend the one who is holding it other than keeping the wielder alive during the battle. Once all the enemies are dead, the wielder will probably succumb to the wounds that got through. You can kill a wielder of this sword by just keeping your distance and pumping arrows into him.

2.) Sightblinder, the Sword of Stealth - The power of this sword only works if people don't know you have it. When the wielder of this sword approaches the unsuspecting, they will see the image of the person they know and trust the most AND COMPLETELY BELIEVE IT IS HIM/HER even when reality dictates that it should not be. For example, if the person you know and trust the most is your grandfather that's who you will see and believe it to be even if your grandfather's been dead for 8 years. The spell affects the mind on a DEEP level. It's weakness is that once the spell is broken (by the wielder being disarmed or whatever) it will never fool you again while THAT person is the wielder, but various images of people will flicker over and over like somebody was messing with the Sightblinder remote and channel surfing.

3.) Dragonslicer, the Sword of Heroes - This is the lamest of the swords to me, despite the cool name. It works the same as a mix between Townsaver and Shieldbreaker except only with dragons. So it's just a sharp pretty blade unless a dragon shows up.  What if you live in a world without dragons?

4.) Shieldbreaker, the Sword of Force - Him what wields it is invincible in battle. Shieldbreaker works the same way Townsaver does but with 2 differences: a) the destructo/kill spell will only activate if your opponents are armed. So if you are surrounded by a legion of unarmed Wing Chun-expert assassins you'd better be REALLY good with your sword skills, because Shieldbreaker is not going to help you. b) Shieldbreaker includes super-defense within its spell, so it will not only kill every armed opponent who dares stray within reach, but it will slice arrows out of the air, break sword blades and smash through shields in order to cut deep into the soft flesh beneath. Other than needing your opponents to be armed for the spell to work, Shieldbreaker’s only other 'weakness' if you want to call it that, is that it will never stop killing until all the enemies are dead. Even if an army 1,000,000 strong attacks. Once they are all dead, however, the wielder will probably die from exhaustion or a heart attack.

5.) Woundhealer, the Sword of Mercy - This is not a "sword" really. Not in function. The spell on it makes it heal all wounds. Period. It is impossible to injure someone with it. Attempts in this regard will only make the enemy more and more able to kick your @$$. It has regrown severed limbs, cured diseases, etc.

6.) Stonecutter, the Sword of Siege - The spell activates whenever it comes close to any kind of stone/rock. Then it instantly carves into it like you were using a light saber to cut into some bread.

7.) Wayfinder, the Sword of Wisdom - This is my personal favorite sword of power. It's friggin' awesome. Once you pick it up, it will instantly know what your greatest desire is (even if you don't know yourself!), and will point the way to all the places, objects and people that you will need to achieve your end goal. It's only weakness really is that you have no idea how long it will take to get to this goal because most of the time you have no idea why the sword brought you here or what this fat guy with the cigar can possibly help you with, or what you are going to use this stupid cup for, etc. You just have to trust it. But it will never lead you wrong.

8.) Doomgiver, the Sword of Justice - This is a highly intimidating sword that will make your attacker feel the emotional turmoil he/she caused anyone he/she has ever wronged EVER. All at once. Just by unsheathing it. If they were bad people they instantly turn over a new leaf.

9.) Coinspinner, the Sword of Chance - Him what wields it is the luckiest person in the world. Literally. Nothing bad will befall you once you get a hold of this sword. You'll find money, that cute chick will sudden notice how cool you are in an accidental meeting, all the votes will be in your favor, the store will be all out of your favorite sna--! Oop! No there's ONE MORE LEFT JUST FOR YOU, SIR! A life with Coinspinner in it is a really good life indeed. Yes sirree bob. But don't get too attached to it, because Coinspinner, like Lady Luck herself, won't stick around too long for any one person. One day you will look up and literally...

...it will be gone. And lying somewhere for the next lucky bastard to find. ...lucky bastard...

10.) Farslayer, the Sword of Vengeance - This is probably the scariest sword on a personal level. It's also a little more complicated than the others because it comes with a little rhyme and a dance. You hold the sword with two hands and do this little dance while simultaneously reciting the rhyme that you insert your enemy's name into (Sorry! Only one enemy per killin'!) and at the end of the rhyme Farslayer instantly converts into energy and shoots off to bury itself into the heart of the dirty fragger whose name you uttered. Now all you have to do is cower in terror at the ABSOLUTE CERTAINTY that the dead enemy's loved ones are now doing a dance and inserting YOUR name into a certain little rhyme. Good luck with that.

11.) Soulcutter, the Sword of Despair - This is a tricky sword. and only a fool would use it... or someone extremely, suicidally desperate.  Its spell activates just by unsheathing it, and it is formidable indeed. When the wielder of Soulcutter draws this sword everyone within a certain radius (I think it's whosoever is within the wielder's sight) is instantly afflicted with the ULTIMATE in soul wrenching despair and sorrow. Everyone just falls down and moans so pitifully... I can't describe it. Suffice it to say, that if Tyra Banks was afflicted with this sword's power, she would literally have the face of a brown-skinned, 100 year old Mother Teresa. That's how much gut-wrenching sorrow she would be experiencing. It's weakness? It also affects the wielder as well. Doesn't THAT suck?

12.) Mind Sword, the Sword of Glory - This is a VERY dangerous sword in that once the wielder unsheathes it, everyone who comes into contact with him will immediately fall to their faces in ABSOLUTE, COMPLETE AND TOTAL DEVOTION AND WORSHIP. Nothing escapes it's power. Humans, animals, demons, the gods... whatever. They will follow the Mind Sword's wielder to hell without question and do WHATEVER he says.
Posted by M. Rasheed at 4:11 PM