The Divine's Gift of Freedom versus Man's Restrictive Traditions 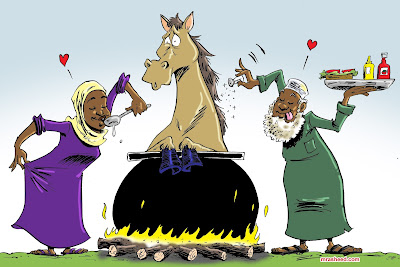 Q: Why is horse meat haram?

Muhammad Rasheed - Horse meat is not haram in Al-Islam.

The Muslim dietary law as established by Allah in the Holy Qur'an is thus and so:
All other foods are lawful for Muslims, and should be eaten in moderation. This is the guidance of revealed scripture sent by Allah, Lord of the worlds. The teachings of the prophet Muhammad (peace be upon him) -- whose job it was to preach the Word of Allah and instruct those who believed in scripture and wisdom -- would never contradict the commands of his Lord. Any so-called hadith that claims dietary restriction contrary to that which Allah established is thus false hadith, so be wise and not of those who go astray.

The Holy Qur'an 2:172-173
O ye who believe! Eat of the good things that We have provided for you, and
be grateful to Allah, if it is Him ye worship.
He hath only forbidden you dead meat, and blood, and the flesh of swine,
and that on which any other name hath been invoked besides that of Allah. But if one is forced by necessity, without willful disobedience, nor transgressing due limits,- then is he guiltless. For Allah is Oft-forgiving Most Merciful.