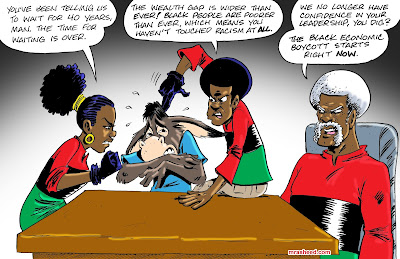 Jeff LaFlamme - So you're mad at the donkey for not eliminating racism?! I say let the donkey do it's job, and focus on the elephant who is trampling all over your equality. Vote for more donkeys.

Muhammad Rasheed - Oh, is THAT how "representational government" is supposed to work? Ignore your own elected officials to focus on what the rival party is doing? 🤔🤨

THAT is why I'm "mad at the donkey," because of bullshit gaslighting exactly like what you just displayed. Apparently "letting the donkey do its job" means to allow the Democratic Party to continue to lead me on and bamboozle me.

Paul Ustruck - Another Russian troll trying to divide the party

Muhammad Rasheed - Is that your argument?

Paul Ustruck - @Muhammad... trolls are trolls trying to divide us. Don't blame me comrade, blame yourself and your handler

Muhammad Rasheed - An actual, well-thought out counter response would be more constructive than you committing to this tired bit: 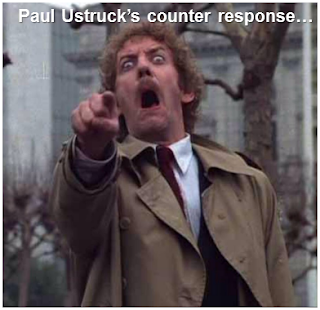 Muhammad Rasheed - I'm not "blaming" you for anything, since you certainly don't seem to be the brains of the outfit. In your world, ANY amount of self-criticism means "russian troll bot," eh?

No wonder you are broken.

Paul Ustruck - @Muhammad... you picked the wrong time frame to be playing the black panther game

Muhammad Rasheed - Oh, really? So your response to "We've been 'waiting' for 40 years for OUR party to see to our needs!" is "The past is the past!"

Muhammad Rasheed - If I had a nickel for every time a white person glorified some white/european something or another from any time period in the past, I could make these cartoons full time. lol But you have the nerve to tell me a highlight point during my own worthy righteous fight is wrong to use as inspiration for my art.

So far I've found two white liberals who actually seem to want to be the enemy of Black people trying to dismantle systemic racism. And here I thought you were supposed to be our ally. Curious.

Paul Ustruck - Huey Newton made more sense than you and I knew him a long time ago, so don't try that "constructive" criticizsm bullshit on me

Muhammad Rasheed - So you think a hollow name drop from the past is a constructive and logical justification for why white liberals hate it when Black people fight against systemic racism, hm?

Paul Ustruck - So far, you have divided me me from other black friends. Congratulations on a job well done comrade

Muhammad Rasheed - Define "friends" in your personal universe, please. Because so far I've only seen evidence of yet another anti-Black racist enemy.

Muhammad Rasheed - Why don't you start being constructive, walking the talk, and generally being an asset to any good and worthy movement?

Paul Ustruck - Aren't you Muslim? Another point that whites need to trash the religion

Muhammad Rasheed - So even though religion hasn't come up at all, you decided to show your true colors (white?) of xenophobia...

...while you are demonstrating resentment of my anti-systemic racism cartoons. Also interesting.

And for the record, you ARE self-identifying as a "white liberal," yes?

Paul Ustruck - And you have identified yourself as a black racist

Muhammad Rasheed - I identify as a Black American Muslim who wants to finally close out the unfinished business of dismantling systemic racism. That's all.

Until today, I was under the impression that the white liberal figure was a willing ally in that fight. #ColorMeEmbarrassed

Paul Ustruck - Not with that attitude

Muhammad Rasheed - My eyes are now open. Thank you for revealing yourself.

It is also noted that you seem to confidently speak for white liberals as a whole. I patiently wait for an official condemnation of your posts from your fellows.

Paul Ustruck - I think that you'll be waiting a long time. Try a black economic boycott. I'm sure that will get you what you want

Muhammad Rasheed - Paul wrote: "I think that you'll be waiting a long time."

We'll see. But if you are correct, it will not change the nature of the fight. The historical record demonstrates that white supremacy is supported both by you and your political rivals across the aisle.

Paul wrote: "Try a black economic boycott. I'm sure that will get you what you want"

Muhammad Rasheed - It is GUARANTEED to get me what I want. That's why you hate it and why you usurped the movement from Dr. King, Jr. But I see you. I'll admit it would be disingenuous of me to not admit that I saw you clearly before you made your very first post.  ;)  You are DECODED.
Posted by M. Rasheed at 11:46 AM