The Decoded Noise of Your Silence 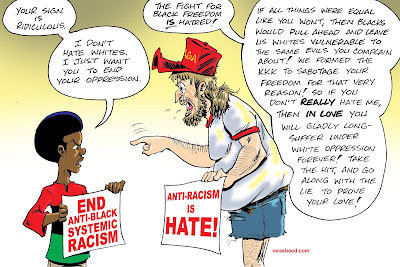 John Roscoe - In your opinion, how legitimate are Conservative accusations of "Liberal intolerance" and "reverse-racism in politics"?

Muhammad Rasheed - The ‘reverse racism’ charge is a kneejerk defensive response towards a perceived threat against anti-Black systemic racism. Since the 1600s, the European ethnic groups conspired across class lines to to create the concept of “whiteness.” This is the racist aristocracy that is fed by the subjugation, exploitation and plundering of Black wealth, preventing them from building wealth over generations and keeping them economically excluded from their rightful share of society’s power and wealth. This situation delegates Black people to the bottom of the socio-economic ladder, saving the poorest whites from being in that role—a situation whites are very protective over.

Consequently, any talk from Black people of escaping this unacceptable situation is interpreted as ‘hatred,’ ‘reverse racism,’ etc., as a direct attack against white culture.


Ken Spragg - I can’t believe anyone dumb enough to hold a sign like that would be smart enough to articulate such a dumb ****ing argument that way. It’d be more realistic if he were screeching something more straightforward like “we won’t just stand by while y’all breed us intuh’ white genocide!”  🙄

Muhammad Rasheed - This is the DECODED translation of the silence he expressed from a direct question he refused to answer. This is what his conspicuous silence sounded like to me. "Realistic" would be just copying the word-for-word dialogue which would have lacked the energy I was looking for in my art piece and brand.

I hope this explanation helps.
Posted by M. Rasheed at 7:45 AM