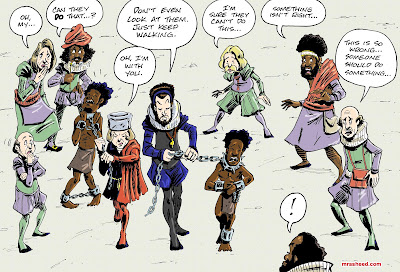 Q: Why is the world so cruel? Why is there so much hate?

Muhammad Rasheed - It takes a lot for the average person to step up and check cruelty/evil when they see it. The fact that cruelty and evil is so prevalent, and the world as a whole doesn’t have a zero policy against it, backs my observation analysis.

The average person will tend to watch in stunned silence—maybe they’ll make some impotent chirp—and let the evil happen right in front of them. That forces me to think that the energy and courage needed to do the right thing is much, much higher than where the base level energies and courage fall in Joe or Jane Normal . This creates situations where evil people can confidently get away with their schemes, and worse, get an embarrassing number of Joe Normals to help them pull their schemes off. Whole armies even! Though there are some heroes who do their part to make the world less cruel, obviously there just aren’t enough of them out there to make it unprofitable to propagate evil.

The reason the world is so cruel is no less than because we all allow it. We’ve misused the Free Will the One God gifted us with and we abuse ourselves in process. In the aftermath, we find a messed up cruel world, that if we don’t assert and shove and grab to force a piece of that cruelty into our own pockets then we’ll be left out of any kind of decent quality of life. This causes us to resent our neighbor over slights both real and imaginary, turning any amount of conflict into raw hatred.
Posted by M. Rasheed at 8:32 AM