Political Corruption within a Theocracy 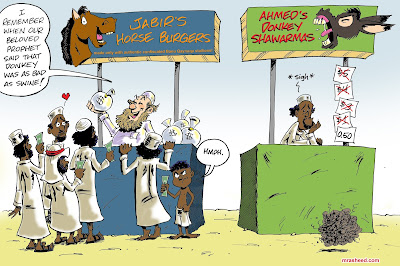 Q: How do you know which hadith is true and which is false in Islam?

Muhammad Rasheed - The true hadith are the ones that align to the message of the Qur’an by verse and/or spirit (see: hadith that confirm the Five Pillars of Al-Islam as commanded by Allah; hadith that encourage freeing slaves as righteous acts; hadith that instruct the believers to treat each other fairly across class, race, or ethnic group lines).

The false hadith contradict the Qur’an either directly or by spirit (see: donkey meat hadith versus Qur’an dietary law; claims that Aisha was a child when the prophet married her versus Allah confirming Muhammad—peace be upon him—was of exemplary character; claims that the prophet continued to own slaves).
Posted by M. Rasheed at 7:54 AM