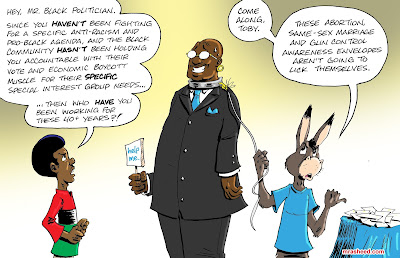 Muhammad Rasheed - They do so through both tradition and the nostalgic memory of political gains scored at the end of the Civil Rights era. Since then, however, Black Americans have been stalled in any further anti-racism progress by the greedy corporate powers on both sides of the partisan aisle. These have created a lot of empty symbolic gestures—like a plethora of Black politicians—that don’t actually perform for the specific political-economic special needs of the Black American community. Consequently, the racial wealth gap is getting wider and wider while not a single Democratic Party politician is doing anything about it.

Mark Warner - I can’t see how one person can speak for the entirety of a people. Your claim sure doesn’t address the cause of many Black Americans I speak too. People don’t vote off nostalgia, they vote for a candidate who would be more beneficial to them, and that just so happens to be democrats. That doesn’t go to say that Democrats are good for the Black Community, just more viable than Republicans.

Muhammad Rasheed - Who are you speaking for, Mark?

The number one issue of Black Americans is our special need of (finally!) being freed from the full economic exploitative shackles of systemic racism. The modern Democratic Party leadership has deliberately diverted loyal Democrat focus away from that number one special need, so that the average “of many Black Americans I speak to” discuss every diversionary partisan topic EXCEPT what they need to prioritize for their own special interest group.

A focused Black Political Agenda that attacks systemic racism with our vote and economic boycott will solve this issue. Without it, we are only wasting our vote on nostalgia and fruitlessly band-aiding the symptoms of economic disparity.

Mark Warner - I won’t argue with you. This is only because we agree on the solution to the problem, yet disagree on how and why it’s a problem.

Muhammad Rasheed - Tell me how and why the problem came about from your perspective, please.

Daniel Gallant - While I'm all for making the Dems accountable, systemic racism is universal. You'll have to boycott all the Repubs before you get to the Dems if you are giving a full shake. You are reading like a right winger.

Muhammad Rasheed - @Daniel... Systemic Racism is "universal" because it benefits the white race, no matter what their political orientation. Consequently, if the Black people do not take charge to push for its dismantling where they are, it will continue to stall and not get done at all.

The issue we've been having as African-American members of the Democratic Party, is that we aren't taking charge of our own special interest train. We can do it in the Democratic Party (recommended since we already have the equity built in it), but our mistake was thinking it was something the party itself was supposed to do FOR us. No, the party is just a tool + resources for us to use to handle our own business, and if WE aren't taking control of our own interests, naturally other people are NOT going to prioritize it for us—even within the same political party. The best way for us to see the Democratic Party so we can get over that curve is to treat it like it was a business organization like the Small Business Administration (SBA). It's not doing anything FOR you, you have to work IT.

This is what it looks like when we successfully drive the train of our own interests ourselves as an actively engaged special interest group:

Daniel Gallant - Pitting 2 goods against each other is not good politics. Fight the real enemy.

Muhammad Rasheed - The real enemy is white supremacy. It turns out the GOP doesn't have a monopoly on that platform.

Daniel Gallant - Now I believe you are just a right wing shill.

Muhammad Rasheed - I believe you are being defensive over systemic racism.

Daniel Gallant - Again wrong answer. It's an appalling situation that sickens me. But by showing hate for other noble causes shows what's truly inside you.

Muhammad Rasheed - Point to the "hate" you see in the cartoon, bud.

Muhammad Rasheed - Here's the actual context the art is drawn from:

There is no hate here. There is only celebration and advancement for my people. Your attempt to sabotage that is the problem within the liberal party.

Are you TRYING to be my enemy? Pro-Black is not hate for others. Stop trying to force that narrative.

Muhammad Rasheed - The only "hate" being shown is your partnering with the Democratic Party stalling the dismantling of systemic racism, and throwing all weight behind other causes, while expecting Black Democrats to help you fix your problems. You ignore our needs while expecting us to work like slaves for you.

While you PRETEND to be my friend.

Muhammad Rasheed - Tell me why you are being defensive over systemic racism, please, when you're supposed to be on my side.  Tell me.

Alfred Montestruc - @M. Rasheed... You seem unaware of some of the history behind this.

Muhammad Rasheed - The full history of why Black people originally switched from one party to the other doesn’t answer the question, Alfred. Since the average Black american isn’t going to dig deep into that history when they cast that ballot for the blue team, it’s clear that your answer steps right over the spirit in which the question is asked.

After skimming through the top answers and finding myself annoyed with the confused jumble of what came across as over-wordy deflection, I decided to actually answer the question head-on and fill the void.

Muhammad Rasheed - Well, there’s a world of difference between typing an historical narrative into the Quora Answer™ app that doesn’t directly answer the question versus directly answering the question without a 1300 word essay describing events so remote and obscure that no modern voter references them at all when they cast their ballots. From my perspective, it would seem your over-eagerness to tell the historical tale at length overshadowed your desire to actually address the questioner’s needs. It’s easy to get bogged down in so much fascinating albeit superfluous detail that you end up forgetting the question itself.

Alfred Montestruc - I directly answered the question, I think much more accurately than you did.

If Blacks had not been burned pretty badly by the Republican party in the 1920s in the post Wilson era, you would not be seeing a virtual refusal to consider Republican candidates now. Their support would be broader spread.

Muhammad Rasheed - Just in the last 50 yrs, the liberal-Democratic Party has betrayed the Black American and reneged on every single promise made to the post-civil rights leadership. Among other reasons, we were thrown under the bus so that liberal presidential administrations could court voters by proving how hostile they were to their own loyal Black Democrat voter base. The question isn't reaching as far back as your historian hat would like to go, and is actually asking for an answer much more in touch with the modern voter mindset. “Why are modern Blacks still loyal after they have been burned so much by their own neglectful and abusive party?” is the underlying spirit of the question.

Alfred Montestruc - Indeed, but what do you expect?? They are democrats, the party of slavery, the party of “soak the rich” and sing dance and party for tomorrow we shall die, the party of “minimum wages” to protect the jobs of white union men. Read Thomas Sowell on that, others as well.

They are the metaphorical Satan, prince of lies. One does not rationally expect Satan to keep his word, or to do the right thing. Blacks had a reasonable expectation, if only based on the self-interests of the Republican party, that they would end the racist Wilson era presidential orders and policies in 1921. Fact is, a Democrat, Truman, did that, and fought the Dixicrats in the late ‘40s. Close to 30 years is a long time to wait on justice.

Yes Republicans did lead the charge on civil rights legislation in the ‘60s, in spite of lies told by the Democratic party on that, but still. Meanwhile the Republican party did nothing whatever to make amends for the bad behavior of the 20s, or even acknowledge it. I wholly agree with you that the Democratic party is the main enemy, but it would go a long way to have the Republican party pull it’s peroverbial head out of it’s proverbial posterior, and acknowledges the wrongs done.

Muhammad Rasheed - It’s not the party that’s the problem, but the mindset of the leadership and members. This isn’t a Democrat vs Republican issue, but a liberal vs conservative issue. The conservative mindset was in control of the Democratic Party when the party platform publicly favored the slave institution, just as the conservative mindset is now dominant in the Republican Party with their Obama lynching effigies and physical attacks on the children of Ferguson activists.

Anti-Black racism is bi-partisan in every way.
Posted by M. Rasheed at 9:18 AM