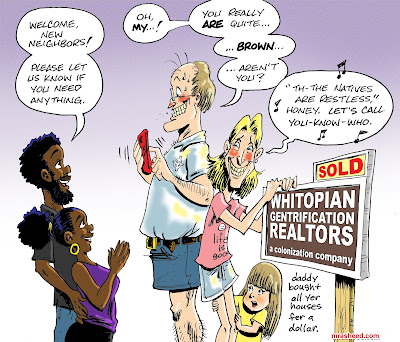 Paul Seitz - What are both the positive and negative benefits of gentrification? In what ways does gentrification affect the people of that neighborhood?

Muhammad Rasheed - This 100% depends on the perspective one views the situation from when experiencing gentrification.

POSITIVE
If you are the gentrificator, then you get to continue the trend of amassing your hoards of wealth by stealing the land and plundering the income of the poor (usually Black people).

NEGATIVE
If you are the gentrificatee, you get to be subjugated, exploited and plundered, while the gentrificator and their supporters tell you to get over it and pull yourself up by your bootstraps, etc.

For those inclined to attempt to justify the actions of the gentrificator by using a scriptural verse such as “be the lender and not the borrower,” then please note that verse was directed towards the God-fearing good guy who would never exploit and plunder the most vulnerable among us for material gains. For those disinclined to see their preferred economic prey (poor Black people) as “the most vulnerable among us,” please note that is only your mass incarceration indoctrination speaking, in which you’ve been trained to support the “Black people are inherent criminals” propaganda that feeds the for-profit prison industry.
Posted by M. Rasheed at 10:52 PM