A Long-Standing Tradition of Betraying America 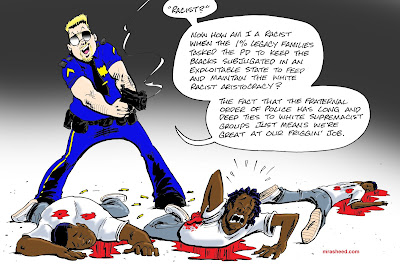 Antoine Pierret - Why is racism normalized, accepted, and not condemned in USA? Is it the same with antisemitism, or is it only racism that is considered okay and normal in America?

Muhammad Rasheed - Since the early 17th century, racism as we know it has always represented building up the white racist aristocracy at the expense of Black people. This hasn’t changed at all up until the modern day. The only difference is that the propaganda arm of the racist aristocracy is much more sophisticated. Instead of pretending the bible justifies plundering Black people this way, they now pretend Blacks are inherently criminal and deserve subjugation and exploitation. The wealthy and powerful benefit directly from anti-Black systemic racism, so anyone condemning that evil isn’t likely to have the influence needed to make a significant change shy of courting another civil war.

The political, social and economic influence of the Jewish peoples is 180 degrees different from that of the African-American. Consequently, people are far more likely to fear the stigma of receiving the “Anti-Semite” charge than they are of being called “racist.”

Michal Dutkiewicz - The trick is to find ways of communicating this with fewer words.

Muhammad Rasheed - You think so? Why?

Michal Dutkiewicz - It's an exercise in economy and directness... You always want to maximize communicative power... It's just my opinion.

Michal Dutkiewicz - That said... There have always been wordy cartoons... So it's not unprecedented.

Muhammad Rasheed - My personal favs are the ones that were 'wordy' (Linus from Peanuts; Calvin & Hobbes; Walt Kelly, etc.), so I'm not adverse to going in that direction when moved.

I think the trick is to just 'flow' in honest self-expression, and do so often enough that your voice is perfected in a style.

Muhammad Rasheed - There's not a whole lot of rules in art. "Practice makes perfect" means to keep doing it until it turns out the way you want. lol

Michal Dutkiewicz - I am a huge fan of Bill Watterson - yes - he has a real gift for language.

Joseph Deutsch - Wattersons not wordy, neither is Linus, they're poetic, evocative.

What you've done here is an essay, making a complex case.

In GENERAL, cartoon is something distilled, synthesized, encapsulated, pithy,

It's impact comes from the punch of a focused idea..at least one panel cartoons.

Perhaps a sequential strip could carry this message more melliflously.
.particularly cause it's so incendiary..

Muhammad Rasheed - Calvin and Linus would often launch into passionate wordy rants and whether they were considered poetic or evocative depends on the subjective opinion of the viewer. To me, what made their wordy rants amusing was the level of precociousness shown.

My cartoon's message is intended to print out the decoded REAL meaning of a complex issue that our mainstream conversation rarely explores. There have been times when one of my cartoons hit the same topic with less words as inspired, but this one is not one of those times. I'm not likely to take the suggestion seriously that I should force them all into some template under the guise of a faux-rule or faux-law, though I do evaluate all seemingly well-intentioned comments for possible universal truths.

Muhammad Rasheed - I did start off doing these as 3-panel strips, but when my schedule changed and I could no longer stick to my strict one-a-day posting goal, I shifted to the 1-panel format. At the moment, I think I like this better, at least until I am able to free up more time.
Posted by M. Rasheed at 7:25 AM