Defense Tactics of the Puppetry Class 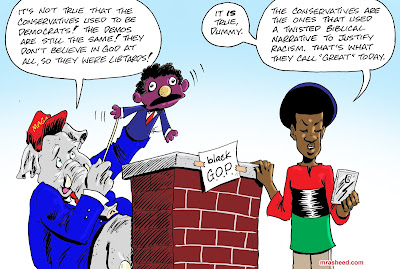 Ellis Anthony Sutton Jr. - How do you feel about the term "coonery" that some black Americans use to criticize other black people that they perceive as engaging in behavior that reinforces negative stereotypes?

Muhammad Rasheed - I actually feel significantly less strong about people’s use of the term itself (read: not at all) than I do about the behaviors that it describes. The latter is one of the items that contribute to the problems of the world, while the former is just an emotional arm-flapping distraction to keep people from narrowing their focus on the destructive behaviors themselves.

Note that an identically impotent song-n-dance is played around the “n-word” hoopla as well.
Posted by M. Rasheed at 1:55 PM