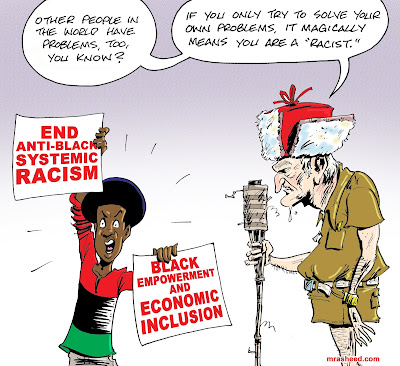 Anonymous - When talking about racism, why is it always about black people? How about Asians? Are Asians less discriminated than blacks when the racists discriminate?

Muhammad Rasheed - This isn’t really a real thing. It’s just a gaslighting misdirection pretending to be a thing. Everybody has problems, and everyone is entitled to attempt to solve their own problems. I can work on my problems while the next guy works on his problems and there is nothing wrong with that. The fact that I’m working on my problems doesn’t in any way take resources away from the other guy working on his problems.

The idea of “Why is it always about the Blacks???” within the same climate where other special interest groups have used the Black American civil rights model of the 1960s to attain their own political gains, is clearly just a way of guilt-tripping Blacks to stop their complaining and let other groups pull ahead of them. Anti-Black systemic racism is still a thing with other groups—including the mainstream white racist aristocracy—still building their wealth by exploiting and plundering Black people, so obviously questions like this one are just part of the pro-racism propaganda campaign to keep Blacks in an exploitable state.
Posted by M. Rasheed at 6:28 AM