The Greatest Medicine of All 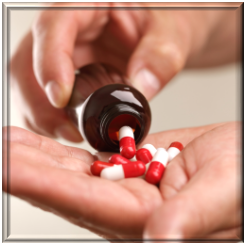 Stephen Wilkinson - [referencing one of my religious debates] lol, ^ Kids debating the "Santaness" of Santa Claus!

I LOVE when create minds that could have found the cure for cancer already are thus engaged!
( rubs "Big Pharma" hands together gleefully )

Muhammad Rasheed - Stephen Wilkinson wrote: "I LOVE when create minds that could have found the cure for cancer already are thus engaged!"

Cancer is proven to be controlled by a preventative lifestyle, and my religion provides me the disciplinary tools to maintain such a lifestyle. Or do you believe the equally well-documented side effects and harms produced from Big Pharma products are providing the secular equivalent of the "blessing" and how dare I'm not inclined to reach for them first?

Stephen Wilkinson - "Muhammad Rasheed wrote: 'Cancer is proven to be controlled by a preventative lifestyle, and my religion provides me the disciplinary tools to maintain such a lifestyle.'"

1. There are MANY types of cancer and the lifestyle discipline you mention is relevant to but a few.

Besides, Knee cancer is highest in religious nutjobs!! :D

Muhammad Rasheed - List three types of cancer that can't be prevented by unfucking your life.

Pseudo-scientific or religious BS will not be tolerated.
Peer reviewed citations required for all 'facts' asserted.

You realize that we are not talking about the immaterial spirit, right? I asked you to give me a list of cancers that can't be prevented by a healthy lifestyle. By listing the above, that implies you have definitive proof that these fit that criterion. We can start easy... do scientists document for record that they know without doubt what causes these listed types of cancer? Provide this info, please.

Stephen Wilkinson - "Muhammad Rasheed wrote: 'Cancer is proven to be controlled by a preventative lifestyle, and my religion provides me the disciplinary tools to maintain such a lifestyle."

Lets see your prayer rug and Meccah pointing compass or hallal chicken deal with cancer of the nutz!

Muhammad Rasheed - 1.) "Although scientists are not sure what the specific causes of testicular cancer are..."

2.) "Testicular cancer is more common among Caucasian males, compared to men of African or Asian descent."

Most of these "common risk factor" abnormal development items sound suspiciously like what happens when you violate an incest taboo. Yeah, don't do that. The Qur'an helpfully lists who you are allowed to sh'boing.

So since they have no idea what really causes it, outside of incestuous deformed people getting it, I'm going to stick to healthy living being more likely to prevent it.

3.) "The incidence of testicular cancer in the USA has more than doubled over the last four decades among Caucasian males, and has recently started to rise among afro-American males."

This one is a no-brainer, and either comes from too much processed "food" in your diet, or those bs drugs (and probably both). This is a clear "healthy living as preventative" item.

Muhammad Rasheed - What else you got?

Stephen Wilkinson - I am restricting my debates with you to matters that are surely within your competency and expertise and look to discuss Cartoons with you in the future.

Your response on a scientific discussion is beyond disappointing and I will not reengage.

Muhammad Rasheed - Despite the wording, I recognize you just got beat up. Don't play with me, Steve-O.

your recognition algorithms must be malfunctioning. :(

Muhammad Rasheed - Whatevs. Note that you failed to comply to the contest requirements, and are thus frustrated at your own foolishness and ridiculous claims?

That means I win natch.

Stephen Wilkinson - sure it does.... [pats Muhammad on the head absentmindedly , then winces a bit as he runs off and runs headlong into the coffee table in pursuit of yet another dubious "achievement"]   :D

Muhammad Rasheed - Meh. I know you are too prideful to admit the loss.  Artifacts of the Black Superheroes

Muhammad Rasheed - I won't hold it against you.

But know you that the thread will always be open for you if you decide to not be lazy and return to the battle.

your stock dropped when you responded with racist inbred allegations and mangled 1/2 quotes from the article, sounding just like a Trump supporter - with a hijab :P

I'm not sure if you read it, and now actually hope you didnt - kinder to assume joke-fail rather than comprehension-fail.. meh. If anything I felt a sense of loss

Anyway, gonna hit the bike for a bit

Muhammad Rasheed - Your article said that 1.) the scientists don't know where it comes from, and 2.) Caucasians get testicular cancer more often. So how is my venturing my own best guess opinion as to what might be causing the disease -- based on the article's own description of the birth defect nature of the listed risk factors mind -- racist?

Your response doesn't come across as objective & rational.

You know, that makes the second time I've witnessed you drop all pretense to scientific, objective thinking, to go all "Yes, master!" over some mysterious force that absolutely does not warrant such blind devotion. I'm going to separate this 'cancer' portion into it's own blog post, as I feel this phenomenon you've demonstrated is worth studying in isolation. Curious.
Posted by M. Rasheed at 5:11 AM