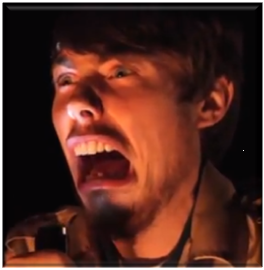 She's out of control, this Officer Murphy.  Paralyzed with fear, a danger to herself, and certainly a danger to any Black people she encounters.  She jumps at every shadow, seeing a menacing, criminal minority threat when there isn't one. She's crazy.

Initially joining the force in an environment in which the FBI proved that White Supremacist hate groups had been infiltrating law enforcement organizations for years, Murphy wasn't anymore 'paralyzed with fear' over Blacks than the average rookie cop who was raised to believe that minorities WERE the problem with the world. She proved to herself and her colleagues in the academy that she was brave, and planned to do what she was trained to do to make sure America -- her America -- was safe from that inherently criminal Black mind.  What she wasn't prepared for was the shear intensity of the subculture of anti-Black fear propaganda ahead of her that the racist White males passed around to each other, all around the country.  Racist White male police officers were no different, and in fact, probably created the worst of it.

You see, instead of telling ghost stories, racists tell each other "Scary Black Guy" stories, and they've been doing it for quite a while now.  Long enough for this form of boogieman figure to be well entrenched into the fabric of the White American communities.  The White male believes within his role as protector, that he guards against the Scary Black Guy, and the wayward Federal Government -- these are his enemies -- whether they actually pose a threat to him or not.  President Barack Obama, who embodies both of these threats combined, represented a Worst Nightmare Scenario of epic proportions in the White community, causing the White Supremacist website StormFront to report skyrocketing new membership numbers immediately after the POTUS defeated Sen. John McCain for the White House seat.

The average 'Horrifying Tale of the Scary Black Guy' surprisingly isn't a fiction, when told among each other in the privacy of their man caves, or break room corners, and what have you.  They are real events with a sociopathic layer of sweaty suspense on top, and often go something like this:

"Man, I almost didn't make it this morning. I swear to God. [visibly shaken]  I needed to get some money out of the ATM, but the closest one to me was on THAT side of town. [terrified *gasp* from audience]  I know, right?! But I didn't have time to drive 45 minutes out of my way, I needed to get these people their payment.  So I pulled up to this machine at the corner. I got out of my car, and HOLY SHIT! [audience flinches] There was this HUGE, Scary Black Guy right ON the corner! ["Fucking shit, man!" "Oh NO!"]  Right?! I didn't even see it him!   ["What the fuck did you DO, man?!"] What COULD I do??  I couldn't just leave, I had to get this payment in... ["Man, fuck that house, man.  You have good credit!  It wasn't worth your fucking LIFE, man!"] I know, but my family. Anyway, I walk over swiftly to the machine, keeping my eye on the Scary Black Guy. He didn't seem to know I was there... he stayed in his smart phone, finishing his White slavery/drug deal or whatever. Why they allow these 'people' to use food stamps to buy electronics and cars and fucking-A shit White Jesus knows I can't afford.  Fucking Obama.  ["You're preaching to the choir, brother."] Anyway, so while the Scary Black Guy was distracted, I got my money out, and got back in the car! ["Holy shit! SOO fucking lucky!"] Then I drove OFF to safety!"

So literally NOTHING happened, except he went to the ATM, got his money out, and left, but this perpetual wall of pure FEAR made it a whole different experience in his mind.  This is what we are dealing with, and why Black men are so disproportionately killed during altercations with White cops, in ADDITION to the White Supremacy Terrorist infiltration part.  This is mess that Officer Murphy had spent who knows how much time listening to from her colleagues, being indoctrinated by this fear of all Blacks, until her already racist fragile mind finally shattered.  But she just represents the extreme ("a" weak extreme compared to actually shooting Black men to death because they twitched their itchy nose) For every tightening grip on a purse, every hurriedly locked door when they see you walk by their car, from shooting you in the face through a closed door, this is the reason why.  Pay attention to how TERRIFIED that cop acted after he had shot Philando Castile, while the young man was helplessly bleeding out in front of his shocked woman and his daughter.  The cop screamed that he told Castile to keep his hands visible, and Ms Reynolds calmly reminded him that he instructed Castile to retrieve his ID, and he was only doing as instructed.  That wall of fear prevented the cop from seeing the reality of the situation he was dealing with, no different than in the ATM tale above.

Obviously White cops are of no value within the Black community (compare this to when those Open Carry wingnuts venture into Black neighborhoods, and what can possibly be going on in their heads!), and are nonempathic, and highly dangerous towards the people.  In their minds, they are "Serving & Protecting" their own White communities by "patrolling" the Black communities in keeping the Scary Black Guy in check.

My solution... which is the only possible solution... is to segregate the police force along racial lines. Keep these people out of the Black neighborhoods.  They aren't helping by acting this way, by going in with the mentality that Blacks aren't really people but a "superpredator" that the White race must be protected from (ironically).  Darren Wilson used this same fear ("He was like a DEMON!") to sell the jury that his version of events was reasonable.  To Blacks it sounded as insane as it was, but to Whites, the story was what they had always believed about Black men. People always recoil as if my police force segregation proposal is the equivalent to returning Blacks to slavery.  I don't understand the closed minds, since the way things are NOW is a literal horror story in my Black communities.

I would certainly like to see better solutions put on the table other than what we apparently have now: An acceptable Black body count.
Posted by M. Rasheed at 9:44 AM