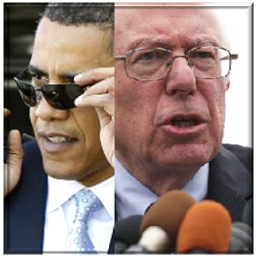 There's one point I wanted to mention that contributed to my deep distrust of your idol Bernie Sanders. I was going to let it go until I noticed he was still in the news.  :D

The far left criticized President Obama from the beginning as being "too cool," and "not angry enough" to the point where the President satirized it using that Key & Peele comedian as his 'Anger Avatar.'  And when he demonstrated his continuing commitment to Moderate leadership in a two-party system, fighting for some liberal items and also items like protecting a Free Market by preventing the cell phone companies from forming a cartel (that I consider "libertarian leaning"), the far left felt betrayed by him.  They felt he wasn't doing enough "for his base," using that typical "his refusal to fully embrace" lobbyist pressure speak.

And then, on cue, here comes Bernie.

Loud and "angry," and acceptably far-leftist for "the base"... to me he gave the impression of a sleeper agent that stepped into a role carefully crafted for a staged moment.   When his new celebrity put him on the national stage, INSTANTLY my bullshit detector red flag went off when people were praising him for his camera-ready anger.  "Oh, is THIS one 'angry' enough for you? lol"  The other praise his early acolytes gave was how 'adorable' he was... "He's like a grumpy old grandpa!  dawww...!"  This one reminded me of what Peter David said in his introduction to the "Sin Eater" trade paperback, (from the celebrated Spider-man story arc).  Basically he said if the writer wants to instantly manipulate the reader into trusting a character, and/or give the impression he/she is harmless, you give the character that pseudo-Yiddish accent/backwards Yoda-talk ("Try, you must").  It was fascinating advice, giving a glimpse behind-the-scenes, so to speak.  I started noticing it whenever that technique was used in film particularly, conscious of the attempt to deliberately push my emotions around by the writers/directors.  The ultimate version of this technique to me was in the character Dr. Vijav Alezais, from the movie Wolf (1994).  The director wanted me to believe this character was trustworthy and harmless, so he had a thick immigrant Yiddish accent.  He also fit the grumpy grandpa trope.

Interestingly, considering his ethnic background, Sanders actually has the reputation of being publicly critical of Israel's treatment of the native Palestinians.  Keep in mind that Israel has manufactured a poor relationship with the sitting POTUS based purely on that "his refusal to fully embrace" lobbyist pressure speak, because Obama has never made any typical politician comments that confirm he will absolutely put Israel's interests before those of the American people.  Of course Israel considers anything less than that to be an active attack, and so they hate his guts.  But what do they say about Sanders?  There SHOULD be all kinds of "self-hating Jew" type talk coming from that direction, amirite?

Well, two of the oldest and most influential Jewish-Israeli newspapers... the Jerusalem Post and their arch business rival Haaretz... both ran the same op-ed article from Ron Kampeas, the Jewish Telegraphic Agency bureau chief, regarding the question of where does Bernie stand on Zionism/Israel.  The piece -- which puts Israeli leadership at ease over the 'Feel the Bern' movement -- makes sure the reader is aware that "Sanders’ best friend is a Zionist who teaches Jewish philosophy," and that his father's relatives had been murdered in the Holocaust (both of which are the Jewish functional equivalent of a hadith's isnad, designed to support claims of legitimacy), as well as the fact that Sander's record on Israel has been critical but supportive and consistent.  This means that a President Bernie will impotently wag his finger and old man grump away at Israel's continuing war crime atrocities, while he hands the USA over to the biggest and most powerful political lobby, proudly continuing the Washington D.C. allegiance-to-Israel tradition.  Some notable pro-Bernie true believers somehow think that he won't, but yes, he absolutely will. The fact that the Internet isn't flooded with that "Bernie is a self-hating Jew!" talk from the Israeli press means that Kampeas' coded op-ed piece told them everything they needed to feel comfortable about the self-described "Old Jew."

So to me, the Bernie Sander's character functions as the well-crafted role that the far left tailor-made for the political stage.  The puppet masters have had plenty of time to analyze the Joe Lieberman performance, and figure out why he was such 'box office poison' for the left-leaning voting block.  They created Bernie Sanders™ on a template based on what they wished Obama was like, coating it with that Peter David-identified, stage craft hocus-pocus, and... *POOF!*  "Why look everyone! Hiding dormant over there in Vermont, it's Obama 2.0!  Angrier! More lovable! More familiar and acceptable to the 'average' American, and thus, less inherently divisive! Very, very Far Left, and as a bonus, very pro-Israel!   This is the character you REALLY wanted to vote for in '08 and '12, America!"  My verdict is still out as to whether Sanders IS a patient sleeper agent in the game for the long haul until activation, or whether the puppet masters just directed his force the way they wanted by tipping and rolling the pan around.

I'm not buying it, and haven't from the beginning.  Oh, and did I mention the whole "Democratic Socialist" thing?  Please get out of my face with this mess.  For all her faults, I think Hillary Clinton is our best bet, if for no other reason than we can count on her to support the Obama Agenda, which we sorely need.  There's a reason why Agent Bernie has been activated, and why else would that be than to keep Clinton from solidifying Obama's policies?  #ImWithHer

NO!! Douse the Bern!

A Sinister Long-Term Goal for America
Posted by M. Rasheed at 11:58 PM