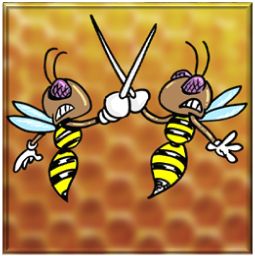 "Write this down, Watson... If you stop killing stuff, it'll stop dying off!"

"Amazing! By jove, I think you've solved it, Holmes! BRILLIANT!"

"Elementary! Lunch is on me, ole chap."

If true, this is VERY GREAT NEWS, although not unprecedented, birds had a resurgence after the banning of DDT.

The important thing to realize is that nature is not necessarily elastic or like a spring.

A good way to think of it is pushing a KNIFE into someone.
Surprisingly, removing the knife does not "make it all just like before"

Muhammad Rasheed - "A good thing to realize?" Why would I "realize" that, when nature bounces back from abuse ALL the time. Even the ozone layer repaired itself after we finally cancelled that irresponsible Hairspray™ Broadway tour. Your impressive intellect wlll level-up significantly once you turn off that damn FoxNews monitor in your Bat Cave, Steve-O.

Stephen Wilkinson - Welcome to science Muhammad, and its often perplexing and contradictory examples!

Your arguments are without merit, as they speak to observation without comprehension.

"Nature bounces back from abuse all the time" - not really, but even more specific is the observation that it does not ( and cannot) "bounce back" from all abuse, or every abusive situation.

Sometimes it is irreparably harmed or more simply, irreparably changed in ways we may not appreciate. Sometimes "nature bounces back" but sometimes it simply cannot - and animals go extinct, gone forever.

Guess what happens when wolves are removed from an ecosystem?

Prey animals (deer ) explode in population and eat off all the vegetation, only fast growing grasses can remain, this means no trees, which then means no tree nesting /migratory birds which means no seeds distributed as droppings and on and on..
The physical landscape also changes, as hillsides now are more easily eroded into the rivers, muddying them and changing the type of life that can be supported there...

I am saying this, not as part of the advocacy to "Do nothing, it cant be fixed"

I am saying this more specifically, to point to the argument that says "TRY NOT TO FUCK IT UP - sometimes it can go all FUBAR!"

Muhammad Rasheed - Stephen Wilkinson wrote: “Your arguments are without merit, as they speak to observation without comprehension. #DontTryToTestMeOnScience :D ”

Stephen Wilkinson wrote: “not really, but even more specific is the observation that it does not (and cannot) ‘bounce back’ from all abuse, or every abusive situation.”

Really? Do you really want to open the "#NotAllAbuse" door? I swear to God & Sunny Baby Jesus I will AllLivesMatter nitpick the shit out of every single post of yours until you finally die from old age next month if you don’t close it back.

Stephen Wilkinson wrote: “Sometimes it is irreparably harmed or more simply, irreparably changed in ways we may not appreciate. Sometimes ‘nature bounces back’ but sometimes it simply cannot - and animals go extinct, gone forever.”

Okay, so extinctions… animals can’t come back from being extinct. So? But the environment itself can recover from damage. It can and will heal from abuse in the bigger picture. The earth is old. It’s recovered from a lot of shit more potent than we can inflict already.

Stephen Wilkinson wrote: “Guess what happens when wolves [...] changing the type of life that can be supported there...”

Meanwhile the fossil record demonstrates that numerous complex animal species will appear to fill the voids created, and the eco-system will eventually recover. For example, the massive destruction that heralded the Younger Dryas event 12,800 years ago messed up everything for almost 1,300 years. The horse and other mega fauna were rendered extinct in North America, and a lot of other horrible craziness took place. The modern homo sapien has cultural memories of this cataclysm (including Noah's Ark), and it was truly terrible… we almost didn’t make it. Several Native American tribes were wiped out, too. But guess what? Nature recovered. Different than before, true. But the balance was eventually returned. So your “not really” is looking feeble and impotent right now. lol

Stephen Wilkinson wrote: “I am saying this, not as part of the advocacy to ‘Do nothing, it cant be fixed,’ I am saying this more specifically, to point to the argument that says ‘TRY NOT TO FUCK IT UP - sometimes it can go all FUBAR!’"

What can happen is that we can fuck up the part that will sustain US, until we’ll have to either abandon Big Blue Marble or die out… and then the earth will recover, regain its balance, and move on without our crazy asses. The earth itself will be fine.

Brian Reynolds - There are a lot more things at play with colony collapse, then pesticides. Varroa mites are a BIG be problem too. My father has been bee keeping since he retired 10yrs ago, and has 20 very strong hives that are all a lot of work to make sure they make it through to the next season. Honey bees are amazing creatures, and the knowledge of how to best keep them, has really only been passed down by word of mouth from 1 bee keeper to their journeyman for centuries. We don't even know 1/2 of all they do for us, or 1/2 of how what we do affect them!

Muhammad Rasheed - That's a great point. It forces me to wonder if the centuries long bee domestication has itself somehow weakened them in someways, making them vulnerable to natural forces that their wild cousins would be able to resist?

Perhaps that concept is what prompted the attempt to improve their gene pool by crossing them with the African Honey Bee.

Brian Reynolds - The African Honey Bee makes more honey, which is why they were crossed with the European Bee in the mid 1800s in South America. The settlers brought Honey bees to the Americas, they are not native here. American Indians were known to refer to them as "the White Man Fly" for once they saw them they knew that a settlement or settlers were within a 5mile radius of the bug they just saw. The beekeeper that mixed the 2 breeds was not as careful as he should have been and a Queen escaped & 150 or so years later we now have their descendants pushing their way up North America.

Muhammad Rasheed - I wonder if their population has also taken a dip?

Brian Reynolds - The African bee is much more aggressive, because protecting your hive is hard when the thing destroying it is the size of a Truck!

Muhammad Rasheed - If that's the reason for the aggression, then it should describe all of them since those conditions are consistent throughout the species. lol

Muhammad Rasheed - I think they're more aggressive because they're Black. #/BlueLivesMatter

Brian Reynolds - Lol...I squashed them cause they were pointing their stingers at me!

Muhammad Rasheed - Wait... the reason why the honey bee population has dropped is because of a mite infestation? Or are you talking about something else that's just a common problem to guard against? Like the bee version of "Ick?"

They are parasites that bore holes into the bee and attach themselves & feed of the bees innards...the exoskeleton can not heal...the mite breads in the comb while the bee larva is gestating...new bee comes out with a couple attached and a few mites that didn't attach come out looking for a bee to call home...each time the mite spawns it makes 7 new mites...they are smaller then a poppy seed.  A lot of keepers have been using powdered sugar on the colonies because the unattached mites have a hard time holding onto a bee dusted with it. Plus the bees eat it and turn it into honey.  Each hive only has 1 Queen, get some mites on her and that colony can go to shit real fast.

Brian Reynolds - 20 good hives, I help my Pop out from time to time with them. Last 2yrs we have collected about 1000lbs of honey a year.
Posted by M. Rasheed at 3:29 AM