Giving the Fans What They Want 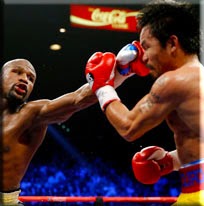 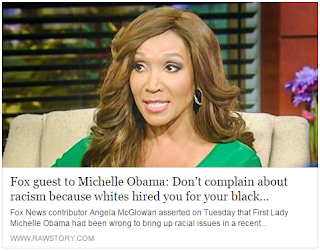 LaVerne Mack – Ugh!! We always tear each other down before anyone else. If only we all could stand together on something; anything! Now she admits racism is still alive, so why not let the first lady's comments rock because that's basically all she was saying. Too easy. Thirst for the lime light or her own

Jay Mac - I don't have the time or patience for those cooning negros......

Steve DelRay - Any Black person on Fox's comments are void.

Muhammad Rasheed - Stop reading & sharing that foolishness. Racists whites hate it when you bring up racial items, too. Should I be surprised when their slaves feel the same way? ("Wha's a matta, massa? WE sick?")

Muhammad Rasheed - Hi, LaVerne! How did you like the fight? As I recall you were one of those talkin' big trash as to what that peewee challenger was going to do.

LaVerne Mack - Wait... Did you just tell me to stop reading and sharing? Really??

LaVerne Mack - The fight Sucked! There was no fight... I think I through more punches in my last playground brawl. Waste of time and money! Total sham.

Muhammad Rasheed - LaVerne Mack wrote: "The fight Sucked! There was no fight..."

Oh. You're not a boxing fan. Sorry. I withdraw the question.

LaVerne Mack - No.. Major fan. Have been since the age of 5. Don't assume. And my assessment stands - the fight sucked. Floyd collected a check.

And don't tell me what to read or share!

Muhammad Rasheed - Oh, I'm not assuming. The fact that you said it wasn't a fight meant you didn't know what you were looking at, and only pretend to be a boxing fan. O_O

Jay Mac - It was a BORING boxing match. The biggest Heist known to man. A bamboozle.

That's what everybody says when their guy gets beat up in a one-sided match when they were SURE he was going to knock the other guy out.

Muhammad Rasheed - I thought it was very exciting.

LaVerne Mack - I don't pretend. Maybe pretending right now that I care about this conversation. But that's about it. We all know going in Floyd was solid on fundamentals, but if he's going to Bill the fight as fight of the century; and giving the fans what they want... Then fight the man.

It was Manny's true believer fans that made it "The Fight of the Century" super-hype event. They are the ones that INSISTED their guy had exactly what it took to penetrate Floyd's celebrated defensive skills and corner him with a barrage of combos. In fact, it was this belief that they based their "ducking/chicken" comments on. Manny failed to make it happen. Floyd merely used the skills he trained all his life to master: Classic Boxing.

Are you REALLY suggesting that the champion lessen himself to fight down to an inferior challenger's ability? lol And you claim to be a boxing fan, huh?

I almost dozed off in the 5th round.

I was taking NoDoze and drinking coffee.

Muhammad Rasheed - I know, because you were mad and disappointed that Manny was unable to do anything beyond what Floyd's normal walk-in-the-park opponents have done in the past. Once you saw that you had indeed bet on the wrong horse, you turned away in disgust and didn’t want to see anymore. I understand. awwww...

Muhammad Rasheed - LaVerne Mack wrote: "...and giving the fans what they want..."

I'm a Floyd fan and he gave me exactly what I wanted. I expected the champion to use his natural advantages, and his hard-won skills, to dominate, and he did so.

It was Manny who failed to give HIS fans what they wanted. As both the shorter man with the natural disadvantage, and the challenger, it was Pacquiao's job to take the big risks; to get inside the Classic Boxer's reach where he had a shot of winning by fighting on the inside. It was NOT Floyd's job to help Manny do HIS job. Hence the word "fight." Manny's job was to take the big risks and FORCE the champion to fight his way and demonstrate to his fans that he was a better inside fighter/brawler than Floyd was a Classic Boxer.

He failed. And that's why he failed.

Funny how you didn't seem to know this even though you insist that you are really, truly, gosh-golly for real an actual boxing fan.

Chris Ray - Because a person doesn't appreciate Floyd's style, that means they aren't a fan of the sport? So becasue Tim Duncan is incredibly fundamentally sound, but I'd rather see Steph Curry fire away, I'm not a basketball fan? Floyd is a great boxer. Floyd's fight are also boring, if you want to see more than counter punches and defense.

LaVerne Mack - How about you delete my posts or skip over them. The Coon you see in others is actually the one staring at you in the mirror. You are no different from the woman on Fox that I posted about.

Muhammad Rasheed - @Chris... I would consider you to not be a fan of the sport if you proclaimed that there was no basketball game because Tim Duncan was doing his thing and not Curry. I think there's a difference between preferring one style over another, versus saying there was no fight at all. Someone who considers him/herself a "fan" should at least be able to appreciate the game on a high level.

Muhammad Rasheed - @LaVerne... Is this how you counter the accusation that you aren't a real fan of the sport? By calling me names? No boxing jargon or nothing? lol

Muhammad Rasheed - I know you are mad that Pacquiao lost, and I told you I was going to come back and clown you when it happened because of all the big trash you talked. No need to get nasty.

Isn't that what the other guy is for? There ARE two people involved in the boxing match though. If one of them is counter-punching & defending, doesn't that mean that somebody else is punching first & offending? The level of excitement is generated from how bad that one wants it. It's also generated by five years of talking shit until finally the champion makes the shit talkers eat their words.

Chris Ray - An exciting fight is exciting to all those viewing the bout. Even if Pac got his block knocked off, it would have been much better than the hug fest for the and the jogging that went on for about 9 rounds. I understand the concept of hitting and not being hit. Yet, when the fight is over and both fighters can go to the club without needing some Advil and and ice, to me, that's boring. And yes, Pac could have contributed to making the fight more exciting, it wasn't not all May's fault. But I've watched many of Floyd's fights, and most end the same way. Again, great tactician, but when I watch boxing, I want to see somebody doing the wabble before the fight is over.

Muhammad Rasheed - Chris Ray wrote: "An exciting fight is exciting to all those viewing the bout."

I'm just saying that if people are bored because it doesn't look like what they see in Rocky, or some other fictionalized version of it designed for the layperson, just maybe they should stop pretending they are "fans" and watch hobo street fights on YouTube instead.

Chris Ray wrote: "Even if Pac got his block knocked off, it would have been much better than the hug fest for the and the jogging that went on for about 9 rounds."

I agree that watching Pacquiao getting the crap knocked out of him -- with his family watching at ringside -- would've been awesome. But it was 100% the challenger's job to take the risk to put himself in that position. Is Pacquiao unaware that the Classic Boxer with the height advantage will absolutely attempt to keep the shorter fighter at the end of his jab, and tie him up whenever he gets close enough to infight where he stands a chance of winning? Of course he knows that. Okay, then where was The Chosen One's strategy for how he was going to neutralize these Classic Boxer tactics that every Classic Boxer in the universe performs?

The reason the fight wasn't as exciting as hoped was because the legions of Pacquiao fans put all of their hopes & dreams into this lesser fighter to do what so many others failed to do, and he came up short and hurt their feelings. If Manny was as good as you all said he was these last five years, then the fight would've been as exciting as you wanted it to be.

Chris Ray - Hahaha. Spoken like a true Mayweather fan. The dude's fights are boring, period point blank. That's awesome that he's getting paid well and charting his own destiny in the sport, but I simply don't like it. Give me a dude with some KO power and his quickness, and you have me as a fan. But that whites of the gloves Olympic points accumulation creates a yawn fest for me. The Memphis Grizzlies are a great team, but I would rather watch G State's free flowing style than Memphis with that rock fight setup. But hey, I don't like smash mouth football either.

Muhammad Rasheed - I am a Mayweather fan, and I am also a boxing student and fan of the discipline. Between Floyd and Roy Jones, Jr., I enjoyed Roy more because he was heavy-handed even when he moved up in weight (KO'ing Virgil Hill with a body shot! O_O ), but Roy lost me by staying in there long enough to allow himself to get pummeled by tomato cans. And now the undefeated little guy has my full backing as the pinnacle of what the sport has to offer. I think Floyd wears it well.

Chris Ray - I loved Roy, but like most, he did hang around too long. Floyd looks like he may get out unscathed, which is a testament to his work. He just doesn't do it for me. And the whole Money Team persona doesn't help win me over.

It's difficult to take subjective bias presented as definitive truths seriously. I don't find the high-level game boring. I love it.

What I hate are when fighters deliberately use less of their skills to appease the layperson. I find that kind of stuff boring. Primarily because I was never a fan of The Toughman Competition, and similar fake boxing exhibitions. I don't like watching the amateurs either, and prefer the skilled game.

Muhammad Rasheed - The Money Team thing is part of his marketing/promotion/merchandise business, and doesn't bother me either way. Similar to Ali's "I AM THE GREATEST!" he can do it all day for all of me as long as he can back it up. That's the only thing I care about.