The Champ Says No More Rewards for the Fake Hero Challenger 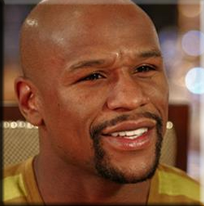 Muhammad Rasheed – Speaking to Jim Gray during an interview that will premiere on SHOWTIME this Saturday night, Mayweather called Pacquiao a "coward" and a "sore loser" before going on to say he has changed his mind about the possibility of that rematch.

Derek Mason - So this dude hit women, but Manny's the coward ? Riiiiight

Todd Holland - I think he's an equal opportunity hitter......Not like he won't whip a dude's ass too.

Kristopher Militant Mosby - The last time Floyd hit a woman was May 2, 2015 in front of the whole world.

Adam Reilly - I wonder if that was the reason they had Manny played by a woman in that SNL skit. At times I have no idea if they are being racist or making subversive commentary. I am not sure they know either.

Kristopher Militant Mosby - Hahaha!!!! I don't watch SNL, so I have no idea. That's funny, though.

Kristopher Militant Mosby - Since making the business decision to shift gears and manage his own brand, every move Mayweather makes is intentional, calculated and three steps ahead of the boxing industry. More than mastering the craft, he’s mastered how to effectively market his movement.

Floyd Mayweather sells an unmatched work ethic, unparalleled dedication and an unwavering will to be the best ever. The other side of his brand flaunts an unapologetic bravado and brash delivery, excessively spending money and engaging in well-documented social media wars. His handling of the media is meticulously strategized and mapped out to mirror a specific marketing agenda. In the end, it all works in his favor, further solidifying his bullet-proof business model.

Mayweather approaches boxing as an entertainment enterprise, fueled by conflict, excitement and the desire of many to see a prideful champion fall from grace. Knowing this, he has embraced the bad boy persona artfully and made it his mission to eliminate the line between boxing and entertainment, making every experience in his career a combination of the two.

When you fully understand your brand, perfect your craft, outwork the competition and possess incredible skill – the only fate in front of you is an unbeatable one. Though there are several swirling debates spanning across social media, sports bars and barber shops nationwide as to where Mayweather ranks amongst best fighters of all time – one thing is certain: nobody has ever earned the name “Money” like Floyd Mayweather.

Adam Reilly - There was an interesting documentary I watched which covers his incarceration and how he took control over his own career. It's called "Mayweather" and narrated by LL Cool J.

Hopefully it hasn't been removed yet.

Muhammad Rasheed - As easy as it is to sit on the outside judging people that we don't know, and creating our own biased and twisted narrative of what we want to believe their lives are like, we really don't know what's going on with them. In the articles I posted above, there is more than enough material where the discerning reader can see other angles that make the situations much more complex than his unforgiving critics want to see.

Should he have hit these people? No. Do greedy people have a history of starting mess so they can hopefully win a large payout from a lawsuit? Yes. And a judge ordered Floyd to get some impulse control and therapy, and since the fighter/businessman has done so, he hasn't had any more of those incidents reported. There doesn't seem to be any real point to continue throwing that stuff in his face and calling him a coward all the time since he seems to have gotten past that stuff.

Meanwhile, despite Manny putting on the same performance of Floyd’s average opponent, with absolutely nobody attempting to ice this supposedly damaged shoulder during the fight, the Pacquiao camp refuses to admit they lost fair and square to the superior technician. This because admitting that he was out of his league would question the point of a rematch, and they wouldn’t want to miss out on that money, no. So he tries to manipulate Floyd into a rematch with more of the same bullshit Mayweather has heard from Manny and his fans for five years now. Refusing to acknowledge he lost, continuing with the childish taunts, means he absolutely doesn’t deserve that shot.

Todd Holland - I don't care much for Mayweather,but damn if I don't see a familiar "Friend" behind the level of the dislike....This yearning to see him "humbled" thing is ringing of the old "Uppity" Ni###r syndrome....If you don't like the guy,why give the dude $100 of your money??? Doesn't make sense UNLESS it was to see him "Put in his Place"...And if that's the case Floyd is a HELL of a lot smarter than his critics.
Posted by M. Rasheed at 2:22 AM