Harvey's Think Like a Man Book - Why All the Hate? 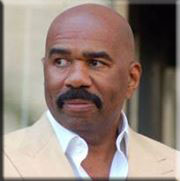 Muhammad Rasheed - I’m surprised to see the vitriol spewed against Steve Harvey’s book "Act Like a Lady, Think Like a Man." I don’t understand the point of the negativity since the book is just composed of a bunch of common sense items related to women on the dating scene based on how they come across to men in their dress, attitude, how soon and under what circumstances they allow him to be intimate with them, etc. It dismantles a lot of ole wives’ tales that women in general, and black women specifically, have been following traditionally when it comes to building a long-lasting relationship with men, from Steve Harvey’s personal experiences and insights.

Would there be individual experiences or opinions that don’t match Harvey’s insights? Sure. All self-help books are like that, being as they are observances from that individual author. Does that mean that they are all worthless? Of course not, and neither is Harvey’s book. A lot of people need to read the benefit of another’s insight on these matters because it’s not like you learn that stuff in school, or have the blessing of being taught those things by parents. Most people learn this stuff in the school of hard knocks, on the fly, and can use any little bit of insight so they lessen the chances of relationship failure. Badmouthing this book doesn’t make a lot of sense unless your goal is to reveal yourself to be a certain type of person... the one that she actually needs to look out for. If the guy is not a social predator, and is looking for a fulfilling and successful relationship with his girl, then he doesn't have any reason to bad mouth this book.

Psy Kyomynde Yobutishyne - Nah...what's ANNOYING is when women who obviously have yet to have an original thought attempt to categorize me based on this book written by a stand-up comedian as if it is THE defining text on male behavior. I mean, they effectively eliminate themselves as a potential mate by that very act. But, all the blahblah that follows as I depart is something I can do without.

Muhammad Rasheed - That's because, after having bumped their heads often against that relationship wall only to end up in yet another bad relationship, reading something like that that finally gives some kind of insight that will actually help in some way will make them feel the same sudden sense of empowerment that people feel when they convert to a new faith for the first time. You have to wait for that enthusiasm to level off. lol

Muhammad Rasheed - Harvey must be a very clever and concise writer.

Psy Kyomynde Yobutishyne - I'm willing to bet the book has the same fanbase as Real Scandal of Love & the Game.

Jeremy Travis - The issue I've most heard women say about his book is that it advises that women give into the mannish behavior of men rather than men being less lootish. It seems that despite there being any good points in these books, they all seem to suggest how women should adapt men as opposed to men adapting to women, or the two finding a happy medium.

Also, Steve comes off as misogynistic at times.

Muhammad Rasheed - I can see that. He's a self-confessed Christian who takes a generally traditionalist POV on the issue, which also happens to line up in many areas to the instinctual way the two sexes respond to each other naturally. It wouldn't surprise me that the modern progressive that supports a moving away from those traditional roles, and even acknowledges the legitimacy of alternate genders, would have a problem with the book and would consider it a relic of old fashioned and primitive values we need to get away from.

Jeremy Travis - Sure, there's that angle. But consider how rape has typically been handled. Usually a girl/woman is told how to avoid being raped, she's told to take self-defense classes or to carry pepper spray or a weapon or to not walk alone in dimly lit places or to put her keys between her knuckles, etc. That's been the standard practice for decades now. And it's not incorrect, those things can prevent women from being raped. But there has been little to no focus on teach boys/men to NOT RAPE. The same thing applies to Steve's advice, he's quick to tell women how to avoid the things men do or say just to have sex but I never hear him address men and say 'stop saying and doing things just to get a woman to have sex with you'. Why NOT teach from a perspective of 'Act Like a Man, Think Like (Feel?) a Lady'? THAT could solve a lot of problems as well.

Muhammad Rasheed - I wouldn't consider a critique that basically boils down to "Why did you write about this instead of writing about something else?" to be one that should be taken seriously. "This book addressed this XYZ that you chose, but I think it fails because you should've done research and written it about ABC instead."

That's coming across as nonsense to me. People write nonfiction based on their own insights and areas of expertise. Also the self-help market appeals to women more anyway. Would investing time into a book that scolds men for their dog behavior be a good business choice?

Jeremy Travis - It would if it's necessary. He CAN write about what he wants to write about, but if the problem is more about doggish men, and less about the women who fall for them, then maybe he should address doggish men. If not, then I don't think he is confronting the root of the problem.

Muhammad Rasheed - He's writing about his perception of the issue based on his own insights from personal experience. To ask him why isn't he seeing it from a different perspective, and writing it from someone else's insights instead, is still a nonsense critique. The complaint should be directed to a wider platform... by enough voices to let interested writers know that the effort maybe worthwhile... instead of complaining that a particular author didn't write something different from what he did write.

Jeremy Travis - I don't think that holds completely. While I do agree that any individual can write whatever, to always put the onus on women is still problematic. Sure, that's HIS perspective, but that doesn't mean that what he's saying will solve the problem. So it's not a matter of can he say it or not and moreso about whether what he's saying is as effective as he or his fans would like to believe. My personal opinion of him is that of a serial womanizer who MAY have learned from his mistakes, but I find his credibility lacking when he's on his third marriage, his previous marriages ended because of his infidelity, and he still seems to think that it is women who aren't doing what they need to do to to avoid men like him.

Muhammad Rasheed - Jeremy Travis wrote: “I don't think that holds completely. While I do agree that any individual can write whatever, to always put the onus on women is still problematic.”

The book is specifically talking to the woman. That’s the audience. “Want to do XYZ? HERE’S HOW!” That’s the format of the book. To suddenly veer off and talk to someone else mid-stride would be sloppy writing. That would be problematic.

Jeremy Travis wrote: “Sure, that's HIS perspective, but that doesn't mean that what he's saying will solve the problem.”

Strawman? Not all women like the book either. For those who share Harvey’s values and follow his advice, they very well may find the positive changes they were looking for. Are any other how-tos judged by whether they “solved the problem?” How is that a remotely serious/realistic critique towards a book? “Meh. It was okay. It didn’t implement World Peace though. Fail. Libertarianism is a failure too because no world leader has used its principles in their government.”

Jeremy Travis wrote: “So it's not a matter of can he say it or not and moreso about whether what he's saying is as effective as he or his fans would like to believe.”

All how-tos represent the advice of the author from specific techniques that work for them, or are from their own personal insights. Results may vary because each person is different. Who doesn’t know that? I like how all criticisms to successful black products ALWAYS operate from the “New Nigga Rule” theory. “Oh, we’ll invent a whole new rule to judge your uppity shit by, nigga!”

Jeremy Travis wrote: “My personal opinion of him is that of a serial womanizer who MAY have learned from his mistakes, but I find his credibility lacking when he's on his third marriage, his previous marriages ended because of his infidelity, and he still seems to think that it is women who aren't doing what they need to do to to avoid men like him.”

This is a genetic fallacy, bypassing his book’s actual content to attack him because of his past relationship choices. Interesting considering all of his insights come directly from his personal experiences.

Jeremy Travis - OK, in general, what would be good, valid reasons to be dismissive of someone's self-help books and the advice within them?

Muhammad Rasheed - A caucasian, virgin comic book fanboy from a small town in Alabama, who's never left his mom's basement, writes a how-to on how to be a ladies' man in the African-American Chicago club scene.

You may safely dismiss that one. Feel free to analyze it as to why.