You can never be TOO careful...

A. Alfaritsi - It is. If I recall correctly, meat of all herbivore animals (those that don’t have fangs) are halal. Some say that if you eat too much rabbit meat people become gluttons, so you might want to watch out for that.

Muhammad Rasheed - Who said that "people become gluttons"? The shamelessly superstitious? lol I'm not likely to consider "guidance" from that lot.

A. Alfaritsi - Were you the one asking the question? Just take that part as a joke.

M. Rasheed - What if the one asking the question DOESN'T take it as a joke, and it becomes a thing through some weird twist of fate, creating a whole new sect of Islamism... The Radicalized Bunny Mullahs of the Islamic State (RBMIS)?! 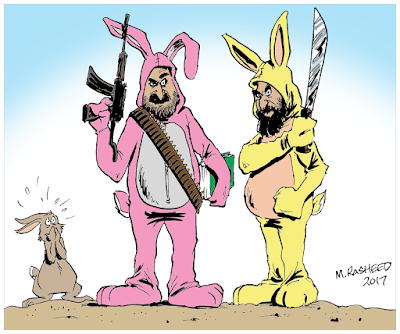 You should take it back.

A. Alfaritsi - I’ll delete my answer then.