Know and Be Free 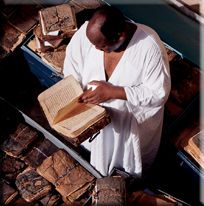 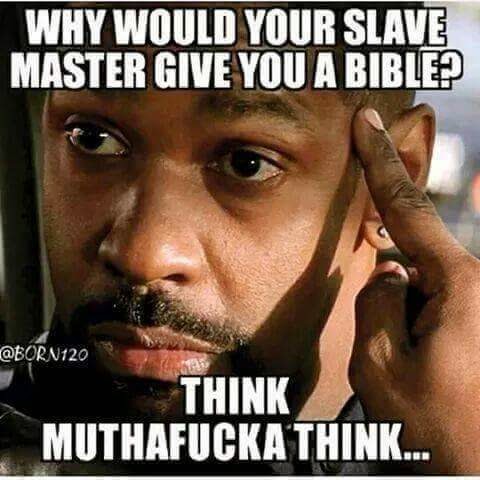 Rochelle Williams - To control us !! and we still reading

Muhammad Rasheed - He DIDN'T give you the bible. He cherry-picked out of it what he wanted you to preach to each other, and told you what the interpretation was to be. He didn't want you to read it for yourself until you were fully indoctrinated with his twisted version of the message.

Muhammad Rasheed - The various versions were still older than the American slave institution. That's why he had to cherry pick what he wanted you to know. Reading it for yourself as an enlightened independent scholar is liberating, not enslaving.

But first you must empty your cup.

Ras Moses - The bible teaches hate, oppression, sexism and prejudice there is nothing liberating about that

Muhammad Rasheed - Why do you think that's what it teaches?

Muhammad Rasheed - Those things are in it, but in a context of behavioral instruction. It shows the history of the past peoples as a life lesson on how to correctly perform on the Path of God. Reading it and studying to show yourself approved is how you learn those lessons. That's why the slave, who only heard the isolated parts picked out by his enemy, was at such a disadvantage. Studying it for yourself gives you the big picture view, and reveals exactly what God wants of you so you have the opportunity to do it and prosper.

Ras Moses - If God wants us to prosper why would he say blessed are the poor and that it's impossible for rich people to get into heaven, the people in the bible had to be slaves to god or be exterminated

Muhammad Rasheed - He didn't say "blessed are the poor," He said "blessed are the meek." meaning that pride is what will keep you from your reward because it's one of the traits of unbelief. The rich are often very prideful, but it is possible to be a wealthy person and still walk in humbleness, recognizing that to God be the glory.

Everything we have and are capable of attaining comes from the will of the One God that made us. It is those who recognize that who will prosper. God wants us to seek after His bounty in the earth and build up wealth, because the believer who blesses the poor for the love of doing good will win the highest reward. God is not against business & commerce. He is only against disbelief and the prideful, arrogant attitude that comes with it.

Ras Moses - Hmmmmm I see, then why are faithful Christians among the poorest people in the world and what is so wrong with pride aren't you proud to be a child of god

Those who are unaware of this, and fail to seek it out for whatever reason, eat the bitter fruit of the lack of knowledge.

"Faith without works is dead." And impoverished.

Ras Moses - You still didn't answer my question, stop speaking in parables. So basically what you are saying is that if people aren't under this biblical spell of belief then they are doomed?

I don't speak down, Ras. I only speak up. No one is worth coming down to a lower level. You should study more. Level up so you may understand.

Ras Moses wrote: "So basically what you are saying is that if people aren't under this biblical spell of belief then they are doomed?”

I’m saying your traditional enemy knew its worth, and gave you just enough to control you.  But you already knew that book for yourself before you came to America as chattel, and in those days you were free.  Free under the One God.  I’m saying that without studying on your own, out from under someone else’s cherry-picked ideology – whosoever that someone else might be – you will only continue to suffer.


Ras Moses - Lol u funny bro, if your brother is lower than you shouldn't you reach down to safe him oh exalted one

Ras Moses - There is no freedom under the biblical god only submission and those who fail to submit are doomed to condemnation, your god is a jihadist, dictator and warlord

Muhammad Rasheed - My brother should have the initiative, drive, and motivation to want to better himself. I can only lead by example. If he truly believes other people should lessen themselves to be on his level, instead of him coming UP to be the best HE can be so that he may know a better quality of life, then I cannot help him. Only when he demonstrates the former state, with a solutions-driven will & determination, can I help him come up.

It is other lesser beings (the state, the white man, priests, etc.) that condemn and restrict me. Study on the Path of God grants me the Freedom to see things the way they really are, and the assurance to act accordingly.  Those who are unaware of this truth live their lives very differently, even when they shallowly claim to believe.  You know the people of God by the fruit they bear, but you won't recognize that fruit for what it is unless you study to show yourself approved.  First, you must KNOW.

The One God is none of those things you've named. Instead He is the All Knowing, the Most Merciful, The Most Compassionate, and the Best Guide. What facts can you supply that support your point of view? Tell me.

Ras Moses - You are trying to make 2 separate subjects connected, you're a great motivational speaker but when it comes to your bible and your god you are totally lost Muhammad Rasheed

Which two subjects are those?

Do you feel motivated, Ras? lol

Ras Moses wrote: "...but when it comes to your bible and your god you are totally lost Muhammad Rasheed"

My possession of those items are the very reason I am not lost, per the reasons explained above. Tell me what the bottomline of your argument is. What about this topic do you want people to know most?

Muhammad Rasheed - Ras Moses wrote: "Ok so where is the liberty in 'follow my rules or be tortured to death'"

Being accountable for the actions you chose doesn't mean you weren't at liberty to choose them. If you lived all by yourself in the woods, you would be 100% at liberty to chop wood for the winter or not, right? But if you opt to use your liberty to NOT chop that wood, you will have to deal with the consequences for what you chose. You still were at liberty to do either or.

Who told you that being free meant you wouldn't have to face the consequences for your actions? Where did you get that?

Muhammad Rasheed - When people deliberately duck questions and run from the discussion, it means they lost. Are you sure you want to do that?

Ras Moses - You still fail to directly answer any question I ask, so who is running, you are well trained but totally lost. Prove to me that your bible is the word of God

Muhammad Rasheed - Ras Moses wrote: "You still fail to directly answer any question I ask, so who is running..."

You believe your inability to understand to be a demonstration of me running from you? hahahaha

Get your game up and you will find that I've been standing here looking directly at you this whole time.

Ras Moses wrote: "...you are well trained but totally lost."

Explain how I am lost from your viewpoint so I may analyze the data for accuracy.

Ras Moses wrote: "Prove to me that your bible is the word of God"

No. That's ridiculous. The request to “prove” the divine origin of a belief system’s source text, which by definition operates on faith, is an unreasonable one. It means that your level of understanding starts even lower than I had generously assumed.

Ras Moses - Keep avoiding and refusing to answer the questions, you seem very good at that, be careful of that high horse you are riding it just might buckle and bring your ass back down to reality

Muhammad Rasheed - I refuse to answer the "prove" question because it is dumb.

What other questions have I avoided? Oh, and stand by for the full list of questions you've ducked, presumably for you to have the opportunity to duck twice.

1. What facts can you supply that support your point of view that the One God is a “jihadist, dictator and warlord?”

2. Which two subjects are you claiming I’m wrongfully connecting?

3. Does my speech motivate you?

4. What is the bottomline of this argument that you want the reader to walk away with as your message?

5. Who told you that being free meant you wouldn't have to face the consequences for your actions? Where did you get that?

6. Do you really believe your inability to understand a parable to be a demonstration of me running from you and avoiding your questions?

7. Explain how I am lost from your viewpoint so I may analyze the data for accuracy.