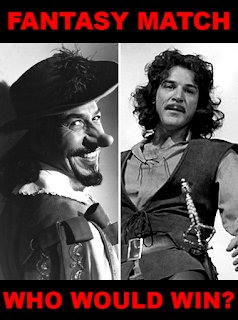 Muhammad Rasheed - Both Cyrano and Inigo are the greatest swordsmen in their storyverses.  As usual when we have these kind of battles, we'll assume that they fight while each are at their best, which means Cyrano isn't old, and Inigo hasn't started drinking himself to sleep.

INIGO
Background of Skills - Raw vengeance motivated a young Inigo to master the sword so he could avenge his father's death at the hands of the sadistically evil Count Rugen, the six-fingered man.  An initial failed attempt at the time of the murder left the 11 year old with a deep wound in each side of his face, requiring a certain amount of healing time.  He then spends roughly ten years studying fencing under the greatest masters of his day, combined with an intensive self-imposed physical regimen designed to strengthen all of the parts of the human body used to grip, control, and use a sword.  His efforts yielded him the rank of "wizard," the next level up from 'master' in William Goldman's story The Princess Bride, making Inigo the greatest fencer in the world. He earned his living during his vengeance quest by challenging local fencing champions in a one-on-one duel, defeating them easily (usually by fighting with his weaker left hand so as not to be TOO bored) and collecting the agreed upon wager funds.

When Indigo found out there were 30 guards between his sword blade and the vile Count he had sought for so long, he asked the brute Fezzik how many could he take, who answered, "Not more than ten."  Inigo responded, "Leaving twenty for me. Even at my best I could not hope to defeat so many."

CYRANO
Background of Skills - Cyrano de Bergerac is a captain in the French army.  The origins of his phenomenal fencing skills are never mentioned, but I speculate thusly: Since he is extremely intelligent, proud of his stubborn insistence on being his own man who is uncompromising in his independence, and a razor sharp, undiscriminating wit who channels his creative talents into biting plays, essays, articles, etc., making him enemies among the high and low born alike, his motivation for learning the sword so well may be as simple as always needing to fight in order to get him out of the ferocious jams his tongue and pen get him into!  Cyrano was always dueling, and he made the quick dispatch of his opponents look embarrassingly easy, but he also used his sword to great affect as a soldier on the battlefields of his day (France was at war with Spain during Cyrano's tale).

The foppish, vain and over-sensitive Comte De Guiche hired a bunch of murderous ruffians to punish the pastry chef and poet Ragueneau, who stung the nobleman with his verses.   Ragueneau ran to his friend and fellow poet Cyrano for help, proclaiming that there were "a hundred ruffians!"  Cyrano immediately drew his sword and rushed to confront the fiends, where he discovered the true number was closer to about a dozen.  "I've been robbed.  This is no 'hundred,'" he muttered.  In the dark alleyways of 17th century Paris, he killed eight of them easily, grinning all the while, and chased off the rest of the remaining awed group with a stamp of his foot.

THE WINNER:    Cyrano would win a duel against Inigo, proving himself more versatile in his skills, and stronger in mind and will.