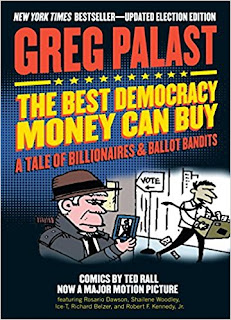 Muhammad Rasheed - During the 2000 presidential election, members of Team Bush out of Florida seized approximately 90,000 ballots belonging to African-American male Democrats and threw them all away. The GOP claimed the flagged ballots all belonged to felons (none of them were), and that felons weren’t allowed to vote (they are). This voter suppression political grifting technique known as “purging” is what enabled Team Bush to steal the White House for the Republican Party.

Everyone was upset by it at the time (oddly, except for Al Gore), and demanded a recount, but in the end, a “compromise” of sorts was reached. The GOP would indeed keep the coveted United States presidency, but they would restore faith in our democratic tradition by taking on the enormous and sacred responsibility of reforming our broken election process. For some butt-fucked retarded reason the nation agreed to this, and pretended George W. Bush really was the POTUS for the next four years. Bush turned over the promised election reform duties to Karl Rove, who promptly used his ‘Federal Election Assistance Commission’ ghoul to set up a GOP-owned voter suppression apparatus in all 50 states, which as its first order of business used another vote suppression technique known as “caging” to steal the 2004 presidential election for Team Bush. Who knows if the ‘election reform’ contract was awarded to Rove forever, or just a limited time period, but they have since used over ten different voter suppression tactics in every single election since.

Interestingly, they also used it in both 2008 and in 2012, but the combination of Barack Obama’s immense popularity, along with his brilliant voter registration and community organizing skills actually overwhelmed Rove’s cheating. A lot of the “Whites are no longer the majority! Waaaaah!!” butthurt that was expressed during those elections was based on the Democrats’ ability to come out in such mega-force, that they were able to push in their candidate despite the cheating measures put in place, yet as Palast points out, the 2012 election was still close. The GOP performed their cheating a lot more blatantly and were genuinely surprised when Obama won anyway. For the 2016 election campaign, with Obama determined to use his rockstar status in an unprecedented move to campaign just as hard for Democratic nominee Hillary Clinton as he had for his own campaigns, the GOP decided not to play around anymore (“This means WAR!!”). The first order of business was to destroy one of Obama’s biggest weapons… the ability to speak to the people and get tremendous numbers out to vote, Vote, VOTE!! The GOP conjured the demon they named “The American Center for Voting Rights” from the pit of hell, and under the false and ironic battle cry of “WE MUST STOP VOTER FRAUD!” demolished the country’s number one voter registration organization known as the Association of Community Organizations for Reform Now (ACORN). They then unleashed a new voter suppression technique, the ‘Interstate Voter Registration Crosscheck Program’ and secured the POTUS seat for Russian agent Donald “Babyhands” Trump.

Obama’s efforts to campaign so hard for Hillary proved to me that his administration knew all about the voter suppression machine. Since the time that Bush bestowed the exclusive ‘election reform’ contract upon the GOP contractor Karl Rove, it does explain why the Democrat political elite act like there’s really nothing they can do about it and “let’s just move on.” However, what about BEFORE the contract was awarded to the GOP? How do explain Al Gore and the other White liberals' severely inappropriate “let’s just move on” attitude? Well, there’s no real mystery there since the Dems had been using voter suppression techniques themselves during their savage and cutthroat primary battles.

The essence of the very evil and un-American vote suppression is to block the poor from their right to leverage the political machine in their favor, which would cause a dip in profits for the moneyed class (or at least the rich believe it would as detailed in their risk management plans). Prevent the poor from electing what they need in order for the rich to continue their power & wealth-hoarding trends. On the Democrat side, the class warfare aspect of vote suppression is much more pure, as Palast documents the many instances in which rich Hispanics (D) disenfranchise poor Hispanics (D).

In the White conservative run Republican side, however, the GOP unashamedly target their Democrat rivals along racial and ethnic lines, no different than how their own Democrat political ancestors did back in the 1870s when they sabotaged the gains of Reconstruction.

With apparently unlimited reign to vote suppress all they wished, the GOP experimented with different ways to fully take advantage of their racist, anti-poor people program. My personal favorite – which left me staring, mouth agape at Palast’s pages in trembling fury – was how they married it to the mortgage-crisis fueled Great Recession of 2007. As if THAT scam wasn’t bad enough, the GOP’s vultures very cleverly pointed out that, “Hey, if these poor saps can’t afford the fucked up balloon mortgage payments we’ve tricked them into, then can’t we now make the case that they can’t vote because they no longer have a valid legal residence?” Somewhere they must have heard that the scheme wouldn’t work as long as the poor were determined to squat in the property and thus, continue to collect their mail. So Rove hired a sub-contractor whose job was to force the poor out of their homes, and then promptly call The Federal Election Assistance Commission agents so they could make sure the names of the newly-homeless were struck from the voter rolls.

Amazingly, my summary above barely scratches the service of Greg Palast’s findings in The Best Democracy Money Can Buy. Combined with Ava DuVernay’s documentary 13th, it is an absolute gem revealing the wide open full force of the enemy’s evil plans, in how he thinks, and what his real goals are in his efforts to disenfranchise and exploit the poor minority for his own selfish ends. Palast is thorough enough to end the book with numerous action plan solutions and resources to help those swayed by his fact-based arguments to take the country away from the demons that control it. Highly recommended.
Posted by M. Rasheed at 8:39 PM