The True Fighter vs The Entertainer Hustler 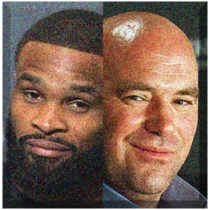 This fat fuck shouldn't be disrespecting the fighters like this﻿

Triple H Aka Sara Jays older brother - He's giving fans what they want, they booed the fuck out of the Woodley vs Maia think about what that says to him, that they don't want to see Woodley fight﻿

CosmicF - Fights are a business; if the fans don't like a fight, then it's not commercially viable. Go fight in a back alley if you just want to fight, but fighters like Tyron need to understand its not just about holding onto a belt.﻿

Doo Steal your Ho Choi p4p #1 - @Triple H Aka Sara Jays older brother... Yeah because Maia shooting 20 takedowns not landing any and not engaging is so fun to watch﻿

Captain Planet - Joe asked Woodley does he care if the fans boo he said he doesnt care what the fans think. You and Dana are obvious fans of the sport and that comment and performance he showed only shows he's not a fighter hes a hustler.

Muhammad Rasheed - Nonsense. A real fighter doesn't care what the fans think. Entertainer hustlers are the ones all about the whims of the fickle audience.

Captain Planet - He's not a real fighter. He's a wrestler first, striker second. Why didn't he use his wrestling instincts to defend Maia and get control of him on the ground? And in terms of striking the only ones he's done are the combination of one twos and a straight hand now and again. To have the physique he has and pretend he is not ready willing and able to finish is nonsense.When he was in strikeforce, he was making sure the job was done. Now hes doing the least for keeping a title which is bullshit because his body says different.

He said hes better than GSP. GSP is a pure mixed martial artist, Woodley is just an opportunist and has a timid mentality for fighting. Gastelum who doesn't look the fittest has more spirit than Tyron and thats more impressive than physique to me.﻿


Muhammad Rasheed - Woodley is definitely a real fighter, because he uses his brain first and goes for the best strategy to defeat the opponent by avoiding risks. He keeps himself in top physical condition so that he is always prepared to stick to his game-plan to the end, and he remains flexible and loose to respond to whatever new angles the opponent may try. He's a scientific, thinking technician who goes for the win at all costs (see: The Art of War by Sun Tzu), which makes him a true fighter.

Combat sportsman who allow what the crowd "wants to see" to override both fight strategy technique and their self-preservation instincts are entertainers, not true fighters. They're also stupid.﻿

Muhammad Rasheed - Woodley's problem here is that he's contracted under a fight promoter whose leadership doesn't respect the techniques of the pure fighter, no more than the casual fans do. The big money generated by the fight entertainment events is hinged upon the ignorant emotions of the casual fans, not the appreciation of the true fighting art purists. Since Woodley doesn't care about the opinions of the former, but himself holds the sensibilities of the latter, his success within the company will probably suffer as shown by Dana White's public snubbing of the champ.

Captain Planet - I get what your'e saying. End of the day it is entertainment because its broadcast on television and if the fans are the reason why hes getting paid, he should have an economical reason why he should care. By the way would you have rather seen Maia fight GSP or Woodley?﻿

Muhammad Rasheed - I'm a close combat True Fan purist and could go either way, with an edge towards Woodley because he's from my own ethnic group. Considering GSP's reputation for "lay-n-pray" and other safe & defensive approaches to many of his fights, I'm having problems seeing why Dana REALLY snubbed Woodley for this other match-up that doesn't promise to be much more casual fan friendly than the Woodley/Maia one.﻿

MrOasis3165 - @M. Rasheed... it does Bisping has never been in a boring fight Woodley has been in loads. Almost all of GSPs fights are boring so facing GSP vs Woodley could be stylistically the most boring fight in the history of MMA.

Muhammad Rasheed - @MrOasis3164... As an actual fight fan, I would absolutely want to see how these very similar styles in Woodley/GSP would solve each others' puzzle. I genuinely hate it when "fighters" don't bring their training into the arena/ring/cage, and instead opt to swing wildly like a couple of uncouth goons who've never stepped foot into a gym before. I especially hate it when they are only encouraged to do this in order to appease the whims of an audience who actually think that the high level technical game of a sport they claim to be fans of is "boring." That level of stupidity is a bit much for me, but I'm not a promoter who has to take the foolishness seriously in order to eat, so...

Ajith Raja - why would he take the best mma bjj fighter who has been doing bjj his entire life to the ground?﻿

Captain Planet - You would if you have wrestling credentials such as woodley's. He wrestles better than he strikes.﻿

Muhammad Rasheed - Pretty much all of these UFC fighters wrestle better than they strike. MMA has a notoriously primitive stand-up game in the current era. That's the reason why some of the conversation around the Mayweather/McGregor event sounds the way it sounds, remember? And why Couture didn't even try to risk trading hands with James Toney.﻿

Muhammad Rasheed - @MrOasis3164... Negative. They all keep their hands down, they all punch from their arms instead of pivoting off their heels, and very few turn their fists over during the throw... and this despite the footage of them stiffly practicing such things in the gym. lol Not to mention that they very rarely use the stand-up game's tried-n-true fight strategies to take advantage of natural gifts, opponent weaknesses, etc. (wth are their coaches supposed to be TEACHING???) Apparently it's far easier to grasp wrestling fundamentals judging from how they actually perform in the Octagon, or perhaps they simply don't respect the techniques of striking and believe how they threw punches on the 3rd grade playground is good enough when they get under the lights.

Lousson26954 - @M. Rasheed... I would love to speculate, but honestly, no one has access to that man's head until he chooses to share.

Muhammad Rasheed - lol So after billions of words in comments under each UFC video, suddenly we're too shy to speculate?
Posted by M. Rasheed at 7:49 PM