The Uncovered Schemes of the Enemy


Daniel Barker - There's a lot of talk about the British Empire this week and I want to keep reminding people that Operation Legacy was a thing and it worked. From the 1950s to the early 70s the British government systematically destroyed the documentation detailing the worst crimes of the empire.

This is from Ian Cobain's excellent book The History Thieves: 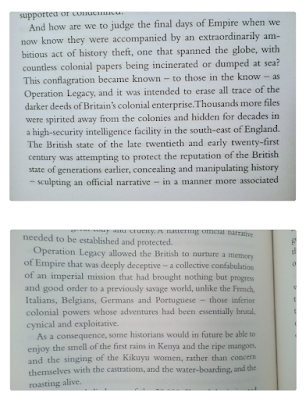 Thousands of people over many years burned and dropped into the sea documents that showed the true barbarity of what Britain had done. Records of abuse, torture, rape and mass slaughter. Because they didn't want history to know what we did.

Beyond that, it left countries gaining independence without records of their own history, of the subjugation that informed their new freedom.

In the 1970s diplomats checked to see which countries new about Operation Legacy. Malta and Kenya did, 35 others didn't. Great.

In 2013 William Hague told the commons we would pay £1.2m to Kenyan survivors of British internment and torture in the 1950s. That only happened after years of lawyers and historians toiling to force the government to admit it still had some records somewhere.

I can't do justice to it here but the fight to reveal what happened in Kenya is an amazing story. Britain in Kenya in the 50s was despicable.

The colony's Attorney General described treatment of the Mau Mau in Kenya as 'reminiscent of conditions in Nazi Germany or Communist Russia.' He continued to oversea them and added new torture techniques. On redrafting the law to do this he wrote to the colony's governor.

The Attorney General, Eric Griffiths-Jones, new secrecy was crucial. The memo states: “If we are going to sin we must sin quietly.”

Apparently lots of us now believe the British Empire was wonderful. We're supposed to. People have worked hard to make us think that. When we continue to look away from the horrors of the empire we are complicit in the quiet sins of those men.

Gen X Trend Setter‏ - man, the other night I stumbled onto a piece about the Belgian rubber racket in the congo, absolute carnage..

Daniel Barker - yeah the history of the Congo is seriously grim.

anonymous account‏ - "Severed" on the cultural history of severed heads also sheds some light on how fucked up things got.

What duck?‏ - I sort of knew they weren't encouraging us to think too hard about the Empire but I had no idea it was this premeditated

Ryan Locke‏ - THAT and how recently these actions were taken is worthy of discussion alone :D

Jack Bernhardt‏ - Excellent thread. I studied history at university and I didn't know about much of this until this Radiolab episode: Mau Mau

Geraint Thatcher‏ - Yet your expecting other people to feel guilty

Gerry White - Guilt over what our ancestors did vs not whitewashing are two different things, we are responsible for our actions, not anyone else's

john ling‏ - We cannot and should not feel shame or guilt, it was not us, we had no say but we should at least be educated, transparent and open about it

Owen‏ - Yep, definitely. And by the same token we should not be proud of it either (being proud about something a century ago is weird anyway)

john ling‏ - You're right it's weird, it's the mentality that Brexit is built on

Jessica Tasman-Jones‏ - Would it be possible for former colonies to negotiate reparations as part of post-Brexit trade deals?

Muhammad Rasheed - To be CLEAR, the reason why they don't feel guilty about the atrocities that make up the bedrock of the White-Ruled Western Civilization, and why Reparations for the victims of said atrocities are not on the table, is because: 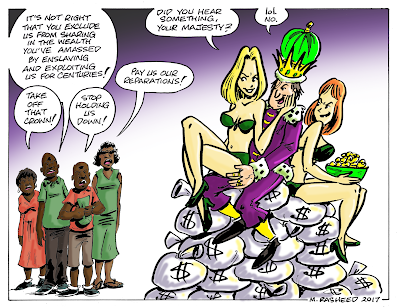