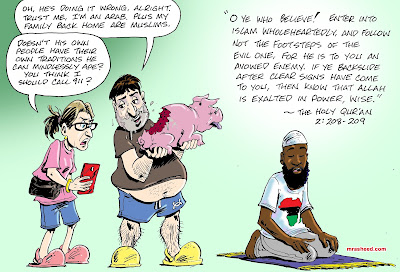 Q: Why do so many black people convert to Islam when it seems that other indigenous Muslims are as racist towards them as white Christians are?

Muhammad Rasheed - There’s a difference between the message of Al-Islam versus the way the religion is expressed in the lifestyles and attitudes of the body of believers.
I think most humans are very aware of this fact—and how very important it is for us as rational beings to be able to carefully discern between the two—and this is why our ideals, and the systems that they are expressed in, can continue to be among us over the ages. It takes a very narrow-minded person to reject a system for no other reason than because he or she witnessed others who claimed to subscribe to the system but performed it poorly. To miss out on the great benefits that the system will provide because you saw that someone else didn’t give it their all is foolishness personified, and I think it is to humanity’s credit that such fools have not been in the majority.

Black people convert to Al-Islam—the divine message perfected by the One God in the religion for all of humankind—because they believe that the Word of their Lord is true and they are not fools. The Straight Way of Righteousness is a merit-based path, and Black people will rejoice in the knowing that they will receive favor with Allah over those arrogant “indigenous cultural Muslims” who merely play in the faith and refuse to master the tenets as full believing Muslims.

Lina Aitsaid - What does it mean to be a secular Muslim?

Muhammad Rasheed - A "secular Muslim" is the functional equivalent of "non-practicing Jew." It's a disbeliever who takes pride in the religion and history of Al-Islam as a cultural, ethnic or even national identity. Also called “cultural Muslim.”

In today's climate, in which a fundamentally narrow-minded rejection of belief in God and the unseen spirit is oddly considered a mark of 'intelligence' or 'progress,' the secular Muslim figure is called upon to use what is perceived as his or her superior rational insight into the faith (divorced from the mind-slowing sludge of actually believing in the religious system, you see) to help the secular community make sense of what is ‘really’ going on in the Muslim world.

In usage, the informal "secular Muslim" title functions as a badge of faux-objectivity by a biased group's very subjective point of view.

Yaqub Wasfi Kazem - Evil, of course, according to you. Being a secular Muslim isn't inherently evil. To them, you're just as extreme as they are evil to you.

Religion is a spectrum. It's not monothilic. Interpretations vary. What makes your interpretations better than theirs? They are just as valid as you are.

Muhammad Rasheed - Evil according to the One God who made me. Being a disbeliever of whatever kind of sub-label is inherently evil. It's evil to reject God in favor of your own flippant vanity. To those who do so, the unrepentant hellbound, it doesn't matter what they think.

The great majority of religions all have the same origins: they were founded by the One God's anointed messengers, whose instruction was eventually covered over and altered by the succeeding generations, tainting the religion of God with paganism and foolishness. This gives the false impression of a highly-varied "spectrum," but the original Word of Allah at their core is indeed monolithic, as it should be. There is only One God.

Yaqub Wasfi Kazem - All this of course is baseless. You have no evidence behind your empty claims.

You make claims, but you lack evidence for them. Fallacious.

Muhammad Rasheed - No, the base source of my claims is the enduring sacred scripture of the ages that entire human civilizations were built around. It’s the atheist who has the monopoly over basing passionately believed concepts on nothing, remember?
Posted by M. Rasheed at 2:48 PM