The Terror of Social Justice 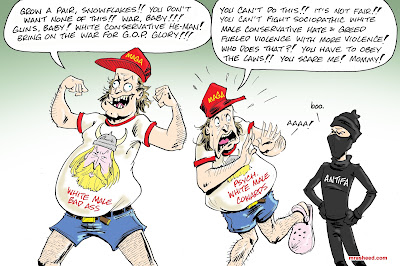 Patrick Parcivel - What is the best way to argue with a moderate who attempts to equivocate Antifa and neo-Nazis?

Muhammad Rasheed - The best way is to simply make fun of them and trigger them until they feel as silly as they look. The reason for this approach is because that group is in active war with you; they have zero interest in facts or hearing a logical opposition position since their whole shtick is the support of the White Supremacist Ideology and protecting it from the ever-vilified “other.” They want only the following items:
They literally don’t care what you say to them—outside of mining it for quotes they can twist into pro-Nazi soundbite propaganda—so your over-generous hope of swaying them to the light is futile and just makes you look the fool when you treat their arguments seriously at all. They are absolutely the Bad Guys. There is literally nothing wrong with treating them that way since they proudly stand in that role.

Fight them with logic, reason and wit, but do it from the battle position of merciless mocking satire.

Muhammad Rasheed - The same body that declared Antifa to be terrorists also dismantled all pro-Black groups (see: COINTELPRO) while allowing the KKK to terrorize unopposed, so I'm not likely to take comments like this one seriously, Country.