When Self-Hate Pretends to Be Love, pt 01 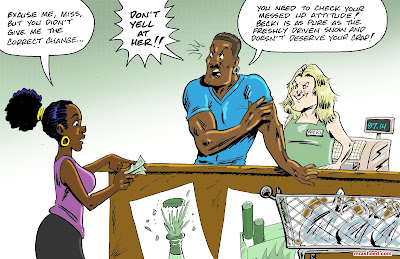 Muhammad Rasheed - I wouldn’t be surprised if Black women did feel betrayed by this behavior. Black men often go out of their way to parrot the hateful things white racists say about Black women, and it’s clear it’s little more than the result of centuries of "white is right!" beauty standard indoctrination, causing Black men to be the number one demographic to reject its own ethnic group's women.

During the Civil Rights Era, interracial relationships became one of the weaponized political platform items that symbolized the fight against institutionalized segregation, but the long-term effects of treating such an item as if “WE MADE IT!” function as an attack against the Black family. This is not to say that it isn’t possible for Black men to have genuine love for a white woman, but there’s a clear difference between the natural, organic growth of a blossoming male/female relationship, versus the brainwashing of politics and its tell-tale rhetoric vocalized by a mass media publicized agenda.

Khalil Malik - There's a Million stories to back this up as THE TRUTH.

Vernon Hampton - As a former retail manager, I've seen this from the other side of a counter. I checked a dude for his Asian girlfriend calling me a certain four letter word. That. Did. Not. Fly.

Jay Mac - Salaam, how many kneeGROWS have we seen do this crap? Remember that sambo Herman Cain?

wright_roland - Why did do that