Temptations of the Fiend 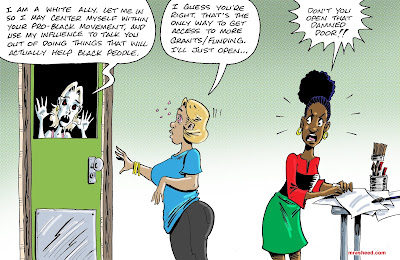 Q: What types of mistakes do white people make when attempting to be allies to people of color, and how can I avoid them?

Muhammad Rasheed - The worst type of “white ally” is just a racist grifter who preys upon struggling, start-up Black Empowerment groups as money making opportunities for his or herself. Once invited in, the faux white ally centers herself as the leader/expert, shoots down all ideas that will actually empower the Black community, and vilifies the actual leaders in the group using the typical racist stereotype kit (“Why are you so angry? I don’t feel safe!”).

So don’t be like that. Show up and listen to the people with an open mind & heart, have funds flow from you and your affluent networks TOWARDS the Black community and not in the other direction, and help/aid the Black leaders of the organization implement their plans while refraining from being a critical, negative jackass.

Peter Nack - Muhammad, I understand your point. But, I have a 55 year political memory. I now consider a tragedy -- yes, tragedy -- when SNCC, et. al. expelled white members in the mid-sixties; whites had died for the movement. ..... I understand that black folk continued and still do bear the brunt of a racist society. However, expulsion? I get it that the leaders must be people of color. But expulsion hurt the cause, so please be open to us white folks now.

The fact that the movement stopped receiving financial support from white donors during this high-level attack -- and how the expulsion of whites and the radicalization of the movement was spun in the press and in subsequent literature, even into the modern day -- was clearly part of the attack. It was designed to demoralize those kids and the community.

What was needed was not more white people, but the unity of the Black community. This much is obvious, both during the time period and in hindsight. Your own oft-repeated version of how you lot prefer to interpret those events, Peter, is falling on me as an offense. But I remain open to hearing a solid argument that makes sense from you as the representative of that group.
Posted by M. Rasheed at 2:17 AM