Notes While Observing: The Sloppiest Cover-Up of All 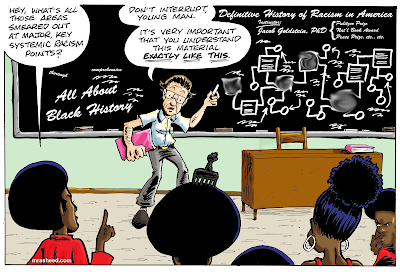 Muhammad Rasheed - I read a potent post from a Black activist about a month or so ago that asked if white Black History scholars ever considered the Black scholars that were now left out because of the space they are filling. I made a note that it was an excellent point, but kept it moving. I remembered her point later when I picked up a couple of excellent Black History books that happened to have been written by white men.

As I meditated on the idea of this, I noticed that they weren’t “just” excellent books; they were actually the definitive works on key subjects within the history of systemic racism, with the establishment throwing every major literature award at them and holding them and their books up as THE works. The authors were also from the Jewish community. Combined with the very ugly controversy surrounding Dr. Tony Martin’s infamous public battle with that community – which showed them in a very bad light indeed – it revealed a pattern that was as disappointing as it was “smdh” sloppy and silly looking.

Here are a few significant areas where the dots connect in my notes:

I’m not a Nazi, so I have no desire, nor is there reason for me to harp on this item at length, but I do feel compelled to say something about all of this to the Jewish community members that may read this: What you want me to believe about your role in anti-Black racism is completely unreasonable based on the facts of history, as well as how you currently behave regarding it. I honestly can’t tell whether you are really being this ridiculously sloppy with this cover-up attempt, or you just feel arrogantly confident in your powers while thinking I’m just that stupid. It clearly looks like you want to simultaneously deny your history of exploiting and plundering Black people throughout history up into the modern day, while you continue to do it in the classic “have my cake and eat it, too” model. My guess is that the allure of the wealth is just too much to resist, but you still want to play this “We're friends of the Blacks because we are both a persecuted peoples” type role. It looks slimy and slippery and just BAD. It’s not fooling anyone… people HAVE to see all of this, but they just go along with it because they don’t want to be on your bad side and get the “anti-semite” label slapped on them as punishment, which of course is unfair and evil.

My advice is that you just come clean. Publicly put everything on the table, admit for the record that yes, you did jizz on your stomach while pretending you didn’t, and work out some kind of apology/make-up with the African-American community, and yes, this should involve a wealth transfer (You know what I mean). Otherwise this is going to end crazy as there’s only so much abuse people can take. There is a natural breaking point to these actions, and you are well aware of them. I would imagine that it’s this very same “have my cake and eat it, too” habit that’s responsible for the centuries-long trend of people eventually getting fed up and chasing you out of their countries in a murderous mob that you bemoan all the time. I strongly suggest you seize the trends of your history by the horns, and do something different this time. Stop what you are doing, come clean, cease plundering the wealth and sabotaging the empowerment efforts of Blacks, and be the true friend that you currently just pretend to be in order to get close to them. Build your wealth by empowering Blacks instead of stealing from them. Reflect your status as a believing people by creating safe spaces for them to do lucrative business as a generous empowering force, and not a monopolizing hoarder.

I sincerely hope you take this note to heart, and it eventually leads to a change in your minds and actions for the better.

Roger Crownover - Exactly...a white of us vs. them type of sense for the teaching oh how it should be done , in not a humanist way of things and history........funny how the real mis-treatment of fellow humans bubbles up to the top of the teach heap ..

Muhammad Rasheed - @Clayton... lol Of course it is. It's certainly not an African or Middle Eastern name, innit?

Muhammad Rasheed - What is it then? Japanese?

Muhammad Rasheed - I'm not an 'anti-semite' just because I pointed out that -stein isn't African nor Middle Eastern, snowflake. Man-up, please.

Etienne Lacour - First people to create slavery were africans and egyptians, first people to put an end to it were white people, yet there are still some cases of slavery in nowadays' sub-saharian africa.

But thanks for playing.