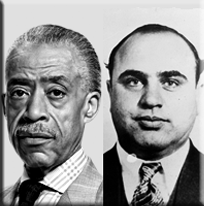 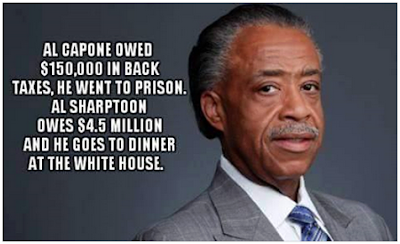 Chuck Suess - But, but, but...  You have white privilege you racist!

Muhammad Rasheed - The difference is that, after Capone slaughtered his gang rivals in the Saint Valentine's Day Massacre, the public demanded that law enforcement do something about Capone. Since there was no physical evidence linking him to the crime that everyone knew he did (see: Darren Wilson) federal authorities went after his sloppy book keeping and back taxes instead.

Sharpton isn't a gangster. He's just a vocal anti-racist. I can see why y'all would look at him as a gangster though.

Chris Suess - whatever, if you support this Jew hating Black Supremacist that is your business.

That means you have blind faith that Sharpton must be a "racist" and a "jew hater," and even though you can't prove it, that's just what you want to believe.

Tell me why you think these things if you really what me to understand your point of view and take it seriously. "Whatever" is the stance of the stubborn.

Chris Suess - he has a long history of shit talking Jews, Homosexuals, and Whitey.

Muhammad Rasheed - Yes? "Shit talking" in what way? You are "shit talking" on him now because of things you think about him. Should I take that to mean you hate all black people?

I can't stand Israel's politics and ways of doing business in the world since their founding; I 100% disagree with the Zionist political agenda. I do NOT hate the Jews. Is this what you are talking about?

Chris Suess - are you too stupid to use YouTube?

Muhammad Rasheed - Do you expect me to research to support YOUR ignorant point? So you say "whatever" in response to a challenge to flesh out YOUR argument, but think that it's MY job to prove YOUR points?

Muhammad Rasheed - Where the hell did you go to school, Chris?

Steven Georgio - Al Sharpton is far worse a cunt than Al Capone ever was. Al Capone gained power, fame and riches by destroying the lives of fellow scumbags....Sharpton has done it by destroying the innocent. Surely a smart man like yourself realizes this. No? Added bonus, these facts require very little research.

Steven Georgio - You are correct though, he's not a gangster...just a cunt. On second thought, he is a gangster. Anyone who shakes down businesses into contributing to his various organizations by threatening them with charges of racism, definitely qualifies as a gangster.

Muhammad Rasheed - Steven wrote: "Al Sharpton is far worse a cunt than Al Capone ever was."

A savage killer and drug peddler of organized crime is worse than an anti-racism advocate? Is this your official stance for the record then?

Muhammad Rasheed - Steven wrote: "Sharpton has done it by destroying the innocent. "

Tell me what innocent person that Sharpton "destroyed." And before you say "Google it" please note that I do not for a second believe these things you are saying and have zero motivation to support your pet contentions. Support your own arguments, please. It's YOUR belief system. Prove it.

Muhammad Rasheed - Steven wrote: "You are correct though, he's not a gangster...just a cunt."

"Cunt" is a nonsense insult that only holds weight within your own ideology in this context. If these multi-million dollar corporations didn't have a history of racism dirt on their records, they would simply fight the charges and Sharpton wouldn't have a leg to stand on. They paid because he had proof. In contrast, Darren Wilson wasn't indicted for a racist hate crime he absolutely committed because the DoJ couldn't find physical proof that would hold up in court.

Steven Georgio - Muhammed, I'd like to start by assuring you I couldn't give two shits about Al fucking Sharpton. I only commented earlier because I'm shocked he has any fans whatsoever. The facts are these...he started his career by distributing cocaine (lots of it) killing the very people he professes to love. He in-sighted a riot in Harlem that led to 5 or 6 innocent people being torched alive (all working class poor). He destroyed the career and reputation of all involved with the Tawanna Brawley incident, knowing full well, from the start, the story was bullshit. Ditto with the Duke lacrosse case...And, he is a shakedown artist. The term cunt fits extremely well. Steven Georgio wrote "Muhammed's not too swift."

Muhammad Rasheed - Steven wrote: "Muhammed, I'd like to start by assuring you I couldn't give two shits about Al fucking Sharpton."

That sums up the apparent position of your entire demographic based on their continuous negativity about him on Facebook. I'm not a Sharpton cheerleader or anything, and he is rarely on my own radar, but I do recognize that he generally shows his face in support when one of my people is attacked by one of your people in a way to make national headlines. During those times he takes on a lead role in publicly condemning racist violence, and he's been doing this for quite a while.

Of the many incidents he has provided support for, we have these two you've named where the grand jury ruled in favor of the defendant. To act like these two incidents represent Sharpton's entire career, and somehow completely prove racism is fiction is the very height of intellectual dishonesty. Of the hundreds he's supported, 2 turned out wrong, but that means his entire career is a lie?

Chris Suess - "your entire demographic" = Whitey or Cracker as Sharpton refers to them.

Muhammad Rasheed - I wouldn't expect a man in his position to be very PC considering the heat he gets regularly from his very foul-mouthed critics.

Steven Georgio - Muhammed, His career is fully documented. You're a "you're people" "My people" kind of guy...nuff said.

Muhammad Rasheed - Steven wrote: "You're a 'you're people' 'My people' kind of guy...nuff said."

Are you somehow implying that you aren't?

Muhammad Rasheed - Your entire stance in this thread is that you resent Al Sharpton for standing up for his people over your people. You literally HATE that. What am I to imply from that? You hate active fighting against racist actions perpetuated against my people by your people. You HATE it. You obviously would rather blacks just quietly accept such treatment and let it go.

Muhammad Rasheed - That's 100% the impression you all give when you make your anti-Sharpton, anti-Jesse Jackson comments.

Steven Georgio - This is just silly. Clearly, I hate any and all who fight for civil and social rights because I'm racist. You Muhammad, are a caricature. It's funny how those who think themselves the most insightful often are. Peace.

Muhammad Rasheed - Well, why do you hate them?

Because of all the many events he supported, two he backed the wrong horse? Is that a reason to demonize him forever every single time you bring up his name forever and ever?

Chris Suess - ummm... you are the one that said we hate him cause of his "race work".... this thread is about how he is a fucking tax cheat, but walks because he is a useful idiot for the government.

Muhammad Rasheed - Chris wrote: “ummm... you are the one that said we hate him cause of his ‘race work'"

When you put something in quotes, it means that’s the exact thing the person said. If they didn’t say what you put in quotes it means you are lying, or attempting some form of deception. FYI for future correspondence.

Chris wrote: “…this thread is about how he is a fucking tax cheat, but walks because he is a useful idiot for the government.”

This thread was attempting to prove how the mythical “reverse racism” is rampant throughout the land – stealing freedom from all the good white people and handing it over to the vile blacks – by comparing Al Capone’s back tax situation (he slaughtered a bunch of people but hid it well, forcing the fed’s to go after his tax thing because it was all they could legally prove) to Al Sharpton’s back tax situation (he was sloppy with his businesses and stupid with money, but is in the process of paying that stuff off with help with his friends. Oh, and also he didn’t slaughter a bunch of people like an infamous organized crime boss). He “walks” because he made arrangements. Al Capone’s idea of making arrangements was “Fuck you, copper!! See? You'll never take me alive, see? Yeah!!”

Chris Suess - yeah, I used "race work" cause I dont believe he is doing what you claim.

Muhammad Rasheed - Okay, then let’s use the Tawana Brawley incident as an example. Tawana claimed that she had been attacked, raped, etc., by several white men. Almost the entire black community was up in arms: “What??? MORE???” They demanded justice be done. In the very beginning, before all the facts were known, Tawana was treated very poorly by the mainstream community. They never treated her like the minor she actually was, and were very unfair. Her little community, like in Ferguson, had very little power to protect her, and the press just railroaded her. Sharpton came to, no less, use his own power and reputation to support this young girl in the face of the mainstream juggernaut. If he hadn’t, who would have? As every other American had the right to, she also had the right to trial and justice. The grand jury decided that her story was false, and if this is indeed true, then justice was served. But before we got to that point, she deserved the dignity of being heard and her story properly investigated, and her status as a minor protected. That’s why Sharpton was there to make sure she was alright.

Tell me, Chris: out of all of these white women who commit horrifying crimes but in the beginning, falsely claimed a black guy did it, didn’t they ALSO deserve to FIRST be protected and heard until all the facts were in?

Muhammad Rasheed - Tawana didn't deserve that because she was black?

She certainly didn't receive that support before Sharpton showed up.
Posted by M. Rasheed at 9:58 PM