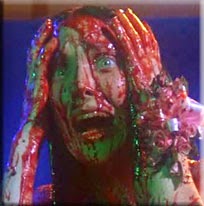 1.) "Carrie is based on a composite of two girls Stephen King observed while attending grade school and high school.

'She was a very peculiar girl who came from a very peculiar family. Her mother wasn't a religious nut like the mother in Carrie; she was a game nut, a sweepstakes nut who subscribed to magazines for people who entered contests … the girl had one change of clothes for the entire school year, and all the other kids made fun of her. I have a very clear memory of the day she came to school with a new outfit she'd bought herself. She was a plain-looking country girl, but she'd changed the black skirt and white blouse – which was all anybody had ever seen her in – for a bright-colored checkered blouse with puffed sleeves and a skirt that was fashionable at the time. And everybody made worse fun of her because nobody wanted to see her change the mold.' ~Stephen King, On Writing"

Muhammad Rasheed - Because that's how people are. It's easier to be an asshole, so more people are assholes than not. The myth is that people are "good deep down," but that's not true; good and bad are opposing temptations, and neither rule by default. You have to deliberately choose one or the other. People are neutral by nature – the thinking animal. Water flows down the path with the least resistance, as do our behaviors, and it is definitely easier to be an asshole than not. That's why people can falsely link "violent extremism" to Islam, but be appalled and confused when you point out the hypocrisy that they can't see in their own practitioners who perform violent extremism. 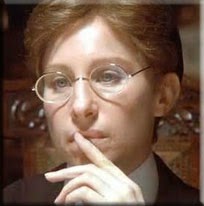 2.) “Barbra Streisand portrays Yentl Mendel, a girl living in an Ashkenazi shtetl named Pechev in Poland in the early 20th century. Yentl's father, Rebbe Mendel, secretly instructs her in the Talmud despite the proscription of such study by women according to the custom of her community.”

Muhammad Rasheed - Notice that these writers don’t have a problem separating “custom of the community” from the tenets of religion, but you can bet that those same folk will insist that the exact same parallels in Islamic countries come from the religion itself. I’ll advise you NOT to take that bet since the described phenomenon is currently going on in another thread. It’s easier for people to be assholes and enthusiastically hold onto their pet hypocrisies.

3.) “Yentl begins with the same premise as Singer's original story. Streisand's character finds herself born into the wrong gender, a woman with the ‘soul of a man.’ Her talent, curiosity and ambition are considered strictly masculine by her society and religious tradition. Unwilling to live with the drudgery of life as a woman, Yentl leaves her home and conceals her gender to be able to pursue the scholarly occupation of a Jewish man. In doing so, Yentl inadvertently embarks on a journey of self-discovery that will defy simple definition and transcend traditional notions of gender and sexual identity.”

Muhammad Rasheed - The “with the soul of a man” item is obvious clap-trap… or it should be obvious rather. The real problem from a common sense standpoint is that's how “woman” is defined in a narrow-minded manner and society is pressured to accept that as their “normal.” It should be clear that this has nothing to do with biology in context.

4.) "Often Jewish-American immigrants who struck out on their own were unable to dedicate the amount of time and energy into text study that their ancestors had."

Muhammad Rasheed - Why? Because they physically, economically couldn't, or because they no longer wanted to?

Notes While Observing – The Crack in the Musical Bedrock
Posted by M. Rasheed at 8:47 AM