A Monarchy? No Thanks. 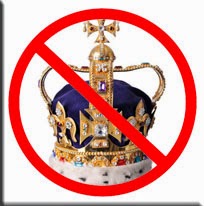 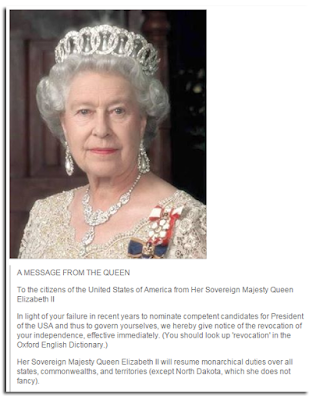 The Message in its entirety

Muhammad Rasheed - "From the queen?"

Just Ceakou - That's what's funny about it. No?

Muhammad Rasheed - Yes, I found the idea of a powerless, puppet figurehead thinking she's going to order me around when "the colonies" have the most devastatingly, genocidal, powerful military in the world pretty funny.

Actually the first thing that comes to my mind when I hear mentions of "royalty/king/queen/prince/princess" was when God told the children of Israel that they didn't need a king, in response to their whining for one. He told them to just do as He commanded and they would be all right.

Consequently, I don't get all warm & fuzzy over queens. So she can go sit down somewhere (joke or not).

Muhammad Rasheed - The late Sir Henry Cooper used to rant about how he was a "royalist," and expressed disdain at our own "elected common citizen" system. So if God said "the divine right to rule" of a human was nonsense, but Cooper doubled down on his support of that nonsense...

...that sounds like he supported a form of paganism.

Just Ceakou - Dude, you are so deep. I appreciate that.

I posted this because this parody made me laugh.

Muhammad Rasheed - I know. I read it about a year ago and was amused. This time around it triggered the rant. lol

Just Ceakou - Believe me the support and promotion of imperialism and genocide is no laughing matter. I feel you!
Posted by M. Rasheed at 11:39 AM