RISING STAR: You Know Them By Their Marks 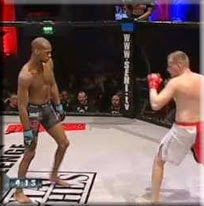 Ricky Mujica – [shared link]  This guy is a bad ass! 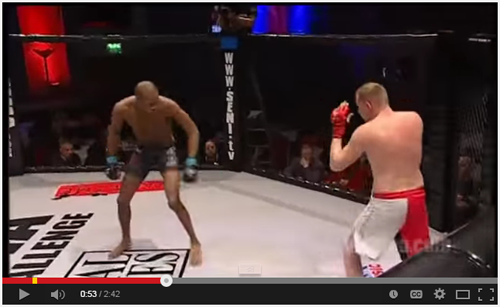 Eric Wilkerson - It's almost unfair. How does one train and prepare for something so unorthodox? It took years before anyone figured out how to bring Anderson Silva down.

Richard Saldana - Oh so it is him

Eric Wilkerson - No this isn't Silva. Just somebody clearly inspired by

Richard Saldana - I thought so

Ricky Mujica - You have to make a guy like this come to you. If your chase him you're in trouble.

Muhammad Rasheed - Yes, his whole style is designed to get you to open up so he can take advantage using his superior speed talent. That's why Silva did that stuff, too. 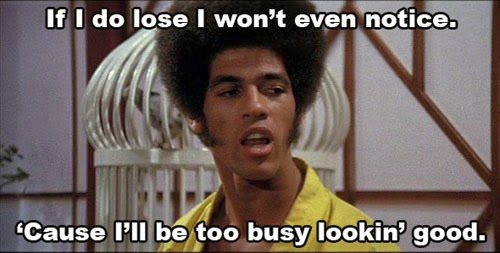 Muhammad Rasheed - Eric Wilkerson wrote: "It took years before anyone figured out how to bring Anderson Silva down."

Ha! Silva brought himself down.

Ricky Mujica - Yep! Page against Rainey. Like I said, you can't chase this guy. You need to make him come to you and you have to use lots of fakes.

Muhammad Rasheed - Page's strength is that he fights from the outside. That's where his talents shine best. To defeat him you must take that away from him. Stay close, smother him, tie him up, fight on the inside where his speed won't be as much of an advantage for him. And you'd better have a great grappling game, too.

Ricky Mujica - You aren't going to smother this guy. His footwork is too good. Look what happened to Rainey. You have to take him out of his game and make him come to you. You need to fake and draw his fire. He's got a counter punch game, you need to counter punch him. But on your own terms.

Muhammad Rasheed - Ricky Mujica wrote: "You aren't going to smother this guy. His footwork is too good. Look what happened to Rainey."

He did smother him while he had him on the cage, and then he let him go. His grappling and mui thai were too weak and he didn't work enough, but Page didn't work enough either which meant that was his weakness. All he wanted was to escape and get back tot he outside where he was comfortable.

Ricky Mujica wrote: "You have to take him out of his game and make him come to you."

He was clearly out of his game while he was clinched.

You're literally asking an average fighter to outperform an up and coming superstar at his best game. As a coach you just set your guy up for failure.

Muhammad Rasheed - Of course, unless, like Silva, he gives the fight away making a goofy mistake. The superstar talent doesn't come along that often, so who would you be coaching to out-counter Page? Are you instructing Bruce Lee? lol

Muhammad Rasheed - In order to have a chance, the average fighter would have to go after Page's weaknesses in his fight plan, and we see Page is definitely weak in the clinch. He had nothing.

Ricky Mujica - I learned that from experience. When I was boxing, that was the only way I ever beat anyone who was faster than me. And as you say, on the inside. But you aren't going to get on the inside by chasing him unless you have incredible defense. Guys like this aren't good on the attack. Their whole game. You need to draw their fire with lots of fakes. Perfect example is the fight between Howard Davis and Jim Watt.

Muhammad Rasheed - Ricky Mujica wrote: "I learned that from experience. When I was boxing, that was the only way I ever beat anyone who was faster than me. And as you say, on the inside. But you aren't going to get on the inside by chasing him unless you have incredible defense."

People that fight long like that have a natural advantage (usually because they are taller, and in this case he is much faster), and it comes with inherent risk to attempt to get past their lightning jab. But you have to do it. Good defense is definitely one of the tools, but just as important is courage. If you don't take the risk and force the fight to go your way, the superstar will be more than happy to dictate the terms of his future highlight reel.

Ricky Mujica - I'm not saying to let it go his way. I'm saying that you have to force him to come to you.

Muhammad Rasheed - The trick is that with his speed, he's able to pot shot from the outside at will, making it very difficult for the slower guy to score. I think that strategy will be harder to pull off.

Muhammad Rasheed - And will look very much like the two clips above.

Ricky Mujica - You have to make him come to you. These guys aren't used to going forward.

Ricky Mujica - But can he beat this guy?  Elias Ajit

Muhammad Rasheed - Ricky Mujica wrote: "You have to make him come to you."

If you don't move forward yourself, or take any risks, it will build his confidence, and his "coming to you" will take the form of yet more blindingly fast pot shots.
Posted by M. Rasheed at 8:11 AM