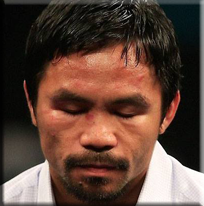 Muhammad Rasheed - Has Pacquiao been in the habit of asking for this shot of toradol before every fight since he first started moving up in weight? Enabling him to walk through people's punches? Is that what started the rumors that he was juicing?

So his camp expected him to be able to do this before the Mayweather fight, it was refused, and he found he couldn't power through Floyd's counter rights, no more than his rival Juan Manuel Marquez could. So during the whole fight he was actually mad that he had to feel pain like a normal fighter, planning the strategy for a rematch using this fictitious shoulder injury so he could make sure he would get his toradol shot next time.

That's why all the top boxing analysts expressed confusion over what appeared to be a strange strategy for Pacquiao's camp to use against Floyd, because Roach didn't think it would matter as long as his guy got his magic shot. Floyd hasn't knocked anyone out in there since his lighter weight days, and isn't particularly heavy-handed, so they expected the toradol to be more effective than it usually is and for Pacquiao to dominate no matter what strategy he used.

And this character was supposed to be the hero of the story, eh? smh
Posted by M. Rasheed at 1:56 AM