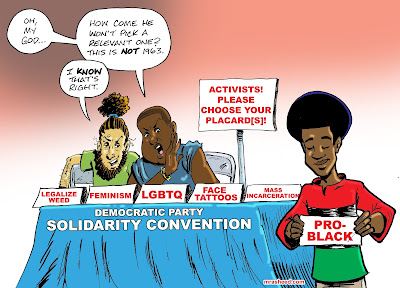 Purinat Sungam - What would you think if the next President of the United States with tattoos on her face were an atheist, homosexual, black, weed-addicted, and ex-convicted criminal at the same time on top of being a naturalized American citizen from Mexico?

Muhammad Rasheed - My favorite part of your question, Purinat, is how you’ve included “Black” within your list of disreputable, inexcusable sins this hypothetical future POTUS is supposed to be guilty of.

Faniel Soneira - Nothing wrong with being a naturalized citizen, either! Except that that disqualifies you from being President, of course…

James Rosten - So true, and we already got past the “black” threshold. No more need for that test. I would vote for the right woman, or member of any minority. But then, I don’t care what the package is wrapped in, I care about what is in the package. Give me the right values and policy positions, and I might even vote for someone named Mohammad, and I am a Christian.

So you think black was the only trait there not negative?

Being a woman is bad?

Being gay is bad?

Being an atheist is bad?

You are just as bigoted as he is.

Muhammad Rasheed - No, I just figured the rest of y’all could defend yourselves. I have my focus razor-sharp for my political cartoon analysis and can’t fight everyone’s battles, too, so I’ll need you lot to pull your weight.

Nick Lilavois - Well I’m a half black half jewish all gay atheist so I have a hell of a lot of weight to pull, so it would be nice if you broaden your perspective.

Muhammad Rasheed - lol Well, be so kind as to take up the war banner for the Black and homosexual portions of his trashy question, please (Jew wasn’t included in his list of inexcusable sins).

You have zero control over me, Nick, nor over what I choose to focus on or how I express myself. Note that I did not say anything negative towards you in my answer. You are out of line.

Nick Lilavois - Im out of line for asking you to be nice?

you’ve included “Black” within your list of disreputable, inexcusable sins

That means everything else is, to you, a disreputable, inexcusable sin.

Im just asking you to broaden your perspective, nicely.

Muhammad Rasheed - No, you are pushing your own agenda at my expense, and being disingenuous in pretending not to recognize the snark/sarcasm of my answer.

You are out of line by asking me to express myself in my activism how you want me to do it. I refuse. As I pointed out earlier, my focus is deliberately keen for the sake of my art expression, and in addition to some other related viewpoints I hold, do not seek to expand the scope of my social justice vision. Please go away. You are now an irritant with little value to your discourse. Thank you.

Wow. I’m as liberal as someone can be, but you are what conservatives make fun of when they make fun of liberals.

Interviewed by a Vampyr

ENEMY LEFT: An Adventure Among the Hostile White Liberal

Dialogue with a White Ally