Fear of That Black Karma 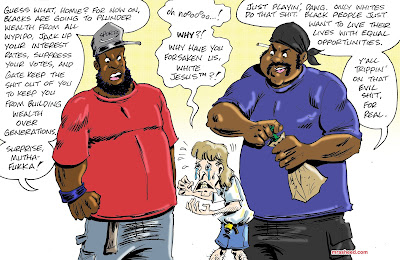 Jesus Carrizales - Can everybody be racist?

Muhammad Rasheed - Is it technically possible? Sure. Is it likely in a real world sense? No.

Racism as we know it began in the early 1600s New World, when the moneyed landowners/investors required a permanent bondsman class to tame the virgin territories. Their usual go-to bondsman class—the ever abused poor white peasants of Europe—decided that they would like a different experience in the New World than what they had been used to for the last several thousand years.

The wealthy European landowners agreed and sympathized with them to a degree, and conspired across class lines to save the poor whites from the slave institution. Instead, the Black people were delegated as permanent chattel, with the poor whites eagerly taking the position as slave takers, slave breakers, overseers, etc. A new aristocracy was created based upon the concept of “whiteness,” with the source of the West’s great wealth coming from the subjugation, exploitation and plundering of Black people continuing up into the present day.

This is what “racism” actually represents. The dictionary definition only describes the propaganda marketing arm of the systemic theft and abuse of Blacks to feed the white racist aristocracy. Whites hold a centuries long tradition of telling themselves it’s okay to selfishly treat Blacks this way based on their institutionalized retcon of history to favor themselves over the people they count on to maintain their ill-gotten high-quality materialist lifestyle.

Under the current anti-Black systemic racism of Western Civilization, it is NOT possible for Black people to be racist. Blacks hold no institutionalized power that would enable them to get away with plundering whites of their wealth to give Black people an economic advantage. Even the hard-won political gains from Reconstruction to the passing of the 1964 Civil Rights Act were immediately stripped of any force, returning the people they were designed to aid back to real and functional second class citizenship. Whenever whites make the false claim that Blacks can be racist, it is always part of the effort to cover over the true, thieving nature of anti-Black systemic racism in order to train the citizenry into believing it is only about surface level “skin color” prejudice on an individual level, so we will overlook the systemic theft of Black wealth by whites.
Posted by M. Rasheed at 2:36 PM