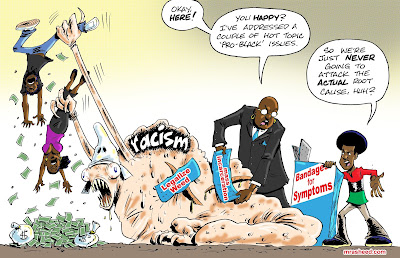 Mabushe Nkwana III - Why are black people hated so much by other races, more especially by most whites?

Muhammad Rasheed - The great wealth of Western Civilization—controlled by the 1% legacy families—was amassed specifically from the exploitation and plundering of Black people. The classes of European ethnic groups who actually inflicted this economics-based abuse on the Blacks were deliberately indoctrinated in the hate philosophy of the White Supremacist Ideology. This was orchestrated to justify in their minds that it was okay to treat another group of humans this way to keep their ‘Whitopian’ economy going.

The raw greed that fuels systemic racism has continued up into the present day, so that even Black politicians are held back from doing very much to save their own people from centuries of continuous abuse.
Posted by M. Rasheed at 1:09 PM