A Routine Sacrifice to Maintain Evil 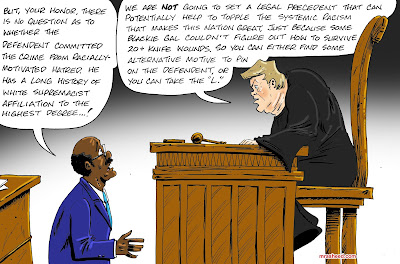 Terrence Clay - Is it irresponsible to speculate that stabbing death of Nia Wilson at the MacArthur BART station was a possible "gang hit"?

Muhammad Rasheed - I think that particular speculation is more than “irresponsible.” It’s a deliberate attempt to force the socio-political narrative in a particular direction that serves only to protect white supremacy, while allowing the most savage among them a free pass to do whatever they like.

Why do you think I hate whites? Especially based on this cartoon's message.

Are you equating "white people" with "white supremacy?" Because that's a line that I wouldn't even cross. My activism is strictly against anti-Black systemic racism, not against the descendants of the Europe's ethnic tribes. The former is an evil blight upon the globe that I do hate, while the latter are people I share the planet with and hold no inherent animosity against.

Please explain your comment further so that we are at least clear.

Anthony Puckett - Not just this cartoon but all the cartoons you push.

Muhammad Rasheed - Are you equating "white people" with "white supremacy," Anthony? So when I speak against systemic racism and want to tear it down you feel defensive?

Why would that be? That's the impression that you are giving me.

Muhammad Rasheed - Tell me why do you think I hate whites, please.
Posted by M. Rasheed at 6:04 AM