A Rival's Petty Glee at Your Internal Strife 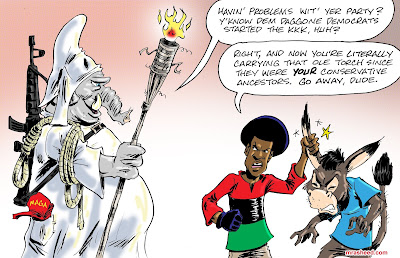 Craig DeBoard - I don't get the joke. Seriously. Usually political cartoons have some sort of irony or punchline to them. This is just stating a fact. Granted it's an ironic fact, but not in that "ha!!ha!!" sort of way. I hope that makes sense. The problem is it means it doesn't entice me to read your next installment. There's nothing there to "hook" me into coming back for more. (I mean I will, I'm an idiot about comics as well, but I'm saying people in general.) That's just something to think about in the future is all.

Art-wise, it's very well done and I don't really see anything that stands out for criticism. Very nice!

Muhammad Rasheed - Hi, Craig. Thanks for the feedback and the kind words.

One of my favorite things about being an artist is the freedom of personal, subjective expression aspect. I certainly wouldn't have been attracted to cartooning if I was forced to conform to some "Usually political cartoons have some sort of..." template. Consequently, I walk proudly with my white plume of independence bobbing along with my gait, assured that I get to be an "artist" in the truest sense of the term.


Craig DeBoard - Well, while I would handle things differently, I also understand that everyone doing things differently is what makes comics and art great. Excellent response! Keep up the great work!
Posted by M. Rasheed at 11:46 AM