The Obligatory Sacrifice in Blood 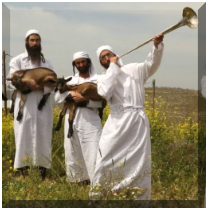 Ishan Almazi - The animal sacrifice during Eid ul-Adha doesn't make sense because all it is is a symbolic re-enactment of something that is thought to have happened in the past.

So as a consequence millions of animals need to die each year. Don't get me wrong, my family loves the meat and cook it in a special style to commemorate the occasion, however it isn't something that should be tied to religion.

Muhammad Rasheed - Ishan wrote: "...because all it is is a symbolic re-enactment..."

Ishan Almazi - I am within an Islamic community, Muhammad.

Muhammad Rasheed - That translates into "This is just something we have always thought. Or at least it's what I've always assumed about it personally. I can't link my opinion about what the ritual means to God."

Where is it written that the blood sacrifice during the Hajj is supposed to represent a reenactment ritual of a past event? Who told you this?

Ishan Almazi - It relates to the test Ibrahim was said to have gone though. The Imams that go to the local Islamic meeting groups have said so.

I’d rather you didn’t ‘translate’ what I’ve written into what is convenient for you to respond to, thank you Muhammad.

Muhammad Rasheed - lol I'd rather that you not write embarrassing items that can only translate into "Because it's what we found our forefathers doing before us!" while responding as a representative of my religion, but here we are.

Cain & Abel were commanded by the One God to provide sacrifices, and since one of them was actually a shepherd, his offering was in BLOOD. So tell me, where is it written that the blood sacrifice during the Hajj is supposed to represent a reenactment of the much, much more recent Abraham/Ishmael event? What are you and your imams basing this opinion on? Tell me if you know.

Ishan Almazi - I receive my understanding from them and given your attitude so far, I don’t think anything I’ll say will please you.

Sadly I don’t have the insight to ask the Imam at a whim, but given your responses thus far I don’t feel like entertaining you.

Muhammad Rasheed - This so-called "understanding" has you now standing as an atheist, Ishan. That gives me a peek into the quality of these imams' "insights." Naturally I'm not impressed.

Pleasing me isn't what I'm asking for; I just needed a simple question answered, and since you do have 133 Quora answers in your account thus far, it didn't seem like that difficult a request. lol

My answers are based on your responses. If you don't like the impression you're leaving on me when you type, then level up. Or at least just say "I don't know." Saying, "I am within an Islamic community" when you have no idea what the answer to my question is, is something I would type if I wanted to be a douchebag based on not wanting to admit I don't know something. Not a good look.

Ishan Almazi - I’m not sure where the Imams got their information, Muhammad. Have a pleasant day.

Muhammad Rasheed - Considering believers were performing the blood sacrifice as far back as the time of Cain & Abel, these imams probably didn’t get their “Eid ul-Adha/symbolic re-enactment of Ibrahim” info from the Qur’an, amirite?

Ishan Almazi - That I am not sure of however I would assume so, Muhammad. Peace be to you also.