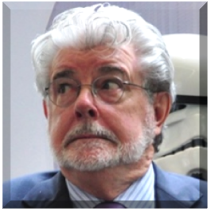 Jamal Yaseem Igle - I've always had a feeling that when Yoda said "No, there is another" in The Empire Strikes Back, he was referring to Han, not Leia.

James Babbo - I always had a feeling the writers were making it up as they went along. Nothing was planned. No one was more surprised by the popularity than Lucas.

Erica Southward - this is my feeling too. Like Lost.

Thomas Scott Roberts - To a great extent, that's true. The whole idea that Darth Vader is Luke's father didn't emerge until the second draft of EMPIRE. And although Lucas did have it in mind for Luke to have a twin sister, it was a late-in-the-day game change when it became Leia. It was originally going to be a new character.

Tom Hodges - 75% of it was written in the early 70s. In fact, pretty much the entire Prequel Trilogy was in the original drafts. But to his credit, he knew that was the least interesting story.

I worked for Lucasfilm on several projects for ten years. Spent a lot of time looking at materials and all sorts of notes. The bulk was always there.

Thomas Scott Roberts - Some elements of the prequels are mentioned in the introduction to the novelization of the first film. Ghosted by Alan Dean Foster from Lucas' working script, the book mentions Palpatine (by name) and his rise. It was published about half a year before the movie was released. So yes, much of it was already there, but some things were invented on the fly.

Muhammad Rasheed - @James... It's STILL being made up as it goes along.

Tom Hodges - Yup. People bitch about the PT but it was put in front of them in 1976 and they ignored it. No, they're not perfect, but their place in the Saga are valid.

Muhammad Rasheed - I think the Prequels would have been truly brilliant if they would have went with the "Jar-Jar as secret Sith Lord" concept.

Thomas Scott Roberts - I suspect many people never read the novelization, and were unaware of the Palpatine reference in it.

E. J. Barnes - But in the original trilogy, at least one character makes an allusion to a historical event known as "the Clone Wars".

Go back to the old outlines and scripts, as far back as 1972, a lot of the material from all of the films are in there. Anyone who writes knows changes are constantly made.

Saying they "winged" it isn't remotely true. The only major change made in the original trilogy was how it ended because there was a third trilogy planned but Lucas had decided that was it.

Thomas Scott Roberts - I'm going by some comments Lucas himself made about the decisions regarding the family relationships. He said that the father and sister reveals were not in even the Leigh Brackett draft of the EMPIRE screenplay. Perhaps 'winging' is a facetious choice of word, but I'm a writer myself. I certainly know the story building process.

James Babbo - I'm always amazed by those that ascribe some deeper meaning to Star Wars which is pure escapist fantasy. Nothing more. Perhaps certain bullet points were there in the original outline but the films constantly contradict themselves, Speculating on what may happen or what did especially with family relationships is wishful thinking & frankly soap opera drama. And it has that feel. The extent of planning who is related to who started that way & got...creepy.


Peter David wrote an interesting critique about how a theme could be the rejection of science in favor of faith (The Force) but to me the only appealing aspect was that anyone could be a Jedi. That of course was erased by the Prequels that seemed to ordain only certain bloodlines could be Jedi. Almost a sinister eugenics tone that wiped away any enjoyment.

Yeah, kids. You could be Robin or Bucky but you gotta be born a Jedi. Like I said. Creepy.

Dan Houser - "I know what I'm about to say isn't very popular -- it may make some fans angry, and many have been less than kind over the years already -- but, and I have to say this -- I created these stories for 12 year olds. To tell stories about the threshold to adulthood.

Muhammad Rasheed - Is that supposed to be presented as an acceptable excuse for why an artist didn't bring his A-Game to a project that had the multi-million dollar backing of the Hollywood Studio elite?

Because that sounds like something sensitive people say when they get butthurt after a trillion people poke their pet project full of holes.

Hey, as an aside, how many Western Literature Classics were actually written for children?

Dan Houser - The prequels were successful. They were the A-Game.

Appealing to all audiences, worldwide, making all the money back and telling the exact story George wanted to tell - in the way he wanted to tell it - with no editor or studio interference -- the man WON.

Sorry if it wasn't what you expected or wanted, or whatever. If George Lucas was butthurt - he used the salve of BILLIONS OF DOLLARS to soothe it. The only thing he seems to have been hurt by was the lack of interest in continuing with his ideas as a whole, and just cherry picking what he gave them.

Muhammad Rasheed - @Dan... Considering the Kardashians are raking in big dollars while we type, money can never be used as a measure of quality. Ever. lol "Critically acclaimed with a poor box office performance" is demonstrated often enough in Film Land for you to know better.

An artist's A-Game is related to him putting together quality work, and in Lucas' case, making sure his story was tight before he released it into the world. This is not an impossible request for a consumer, but giving him a trillion dollars in exchange for sub-par "12 yr old" work is only encouraging Hollywood to churn out mess for the fans to bitch about.

Muhammad Rasheed - Seriously, considering the size of the budget on these blockbusters, there is no reasonable excuse for why the scripts aren't tight. None.

You can apply the same amount of herculean effort used to figure out how to make CGI hair flow believably to plug the damn holes in your story.

Tom Hodges - We get it, you hate the prequels.

Muhammad Rasheed - I don't "hate the prequels," Tom. Stick to the topic.

Or is this a personal, religious stance for you?

Muhammad Rasheed - Do you have a Star Wars shrine in your house? You do, don't you?

Muhammad Rasheed - Do you perform a little genuflection ritual every time you walk pass your Star Wars shrine?

Dan Houser - Critically acclaimed, but made no money -- that happens too - but the public spending money on tickets, giving it acclaim by going to see it over and over, buying merch means they found something in it that you may not have. (I'm betting on good old fashioned juvenile entertainment.)

By no means is public acclaim the measure of quality either -- but when is fan appeal or public appeal ignored? Seems like only when you want to prove a point that something was terrible.

The holes in the story - the problems in the script - all of that was because George Lucas - the auteur filmmaker - got to put EXACTLY what he wrote on the screen. Welp. Looks like he did what he wanted. Again, he's no longer making this things, if anyone's got a hard-on for beating on the man and his films - it's you, dude.

Try to have fun at the movies, but I figure we're at a philosophical impasse, man. So - no more fruitless debate.

Muhammad Rasheed - Dan, there's lots of movies that follow the "good ole fashioned juvenile entertainment" formula that don't capture the film audience's dollar, and some of them used the same source material that inspired Lucas, Spielberg, Cameron, et al. Alter all this time, and all the money spent on research, it's still a mystery why one movie that SEEMS to have everything going for it doesn't do as well as one that comes across as hack work.

Whether businessmen ignore fan appeal isn't my argument at all. My argument is "Why aren't the people who are given tens or hundreds of millions of dollars to make movies, making the necessary effort to make sure their stories are tight before they go into the film production queue?" The answer seems to be because they know the film going audience is willing to give them a pass on sloppy work as long as the movie is flashy, bangy & loud.

Since Lucas made the script up on the fly every step of the way, it doesn't really seem like he did what he wanted. It seems like he had no idea what he wanted, and second guessed himself continuously from a stressed out/freaked out position of quasi-terror. Is this a perfectionist trait? I doubt it, since perfectionists don't tend to have so many holes in a sloppy product released to the public.

I rarely don't have fun at the movies, since I'm generally pretty good at avoiding movies I know I'll dislike. I only get pissed when I'm anticipating a film being enjoyable, only to discover it was crap while in the theater. Like that damned 'Attack of the Clones.'  >:(

I liked 'The Phantom Menace' though.

I liked Sith more than Clones - thought both Clones and Phantom Menace could have been skipped.

Muhammad Rasheed - I have very little memory of 'Revenge of the Sith,' and I watched it twice. lol

Qui Gon's and Obi Wan's Force mastery demonstrations in 'The Phantom Menace' gave me much of what I always wanted from the Jedi (except for why they just didn't use The Force to crush the innards of those destroyer droids).
Posted by M. Rasheed at 1:55 AM