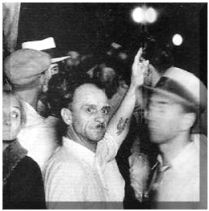 Jane CP Wei - Will people ever realize that the inequality issues of the world do not have roots in race relations, but power hungry leaders with goals of unfair competition?

The wealthy of all colors conspire against the poor by miring them in these false “wars” against “racial discrimination”? More people suffer because of the income gap between the rich and poor! Filthy rich members of disadvantaged racial minorities fuel this to kill off future competition.

Muhammad Rasheed - It's true that some form of wealthy ruling class has taken unfair advantage of the poor for countless ages all over the world. The current wealthy ruling elite families that dominate the globe have done so only within the last 500 yrs, and from underneath the banner of White Supremacy. Western Civilization is absolutely a race-based hierarchal caste system... 'race' and 'class' are entwined as a legacy of the Atlantic Slave trade and jim crow laws that enriched it. Because of this, wealthy minorities jockey for position of influence in the lower-level leadership ranks, and often make decisions that subjugate/exploit their fellow minorities to gain favor from their White bosses.

The fight against classism inequality is ancient, with this particular form of it absolutely rooted in both class and race.

Jane CP Wei - Here’s a problem with buying into the race hierarchy, and correct me if you disagree — If one buys into the “race-based haste system” then one is essentially buying into the potential view that the hell that nearly all of the majority religions speak of is on Earth. The hell pits of fire, as interpreted through the scientific lens, would be the earth when it is no longer inhabitable by the folks who might have evolved with lighter skin and zero heat tolerance (if you evolved from Iceland then in all likelihood, you would die first if global warming took a leap forward). Is it that the “God” or whatever power that has/had control over planet Earth, has such a hierarchy in mind for those who are darker-skinned to stay until the end (when the heat becomes intolerable)? Because if that were the case, and white people get to leave the planet first in space exploration, would that not make you upset? I would rather not buy into it and wish/work towards a planet of the most collaborate and intelligent beings of all races (note that diversity helps survival of the species). Why is that such a dauntingly difficult message for anyone to accept?

Muhammad Rasheed - Jane, I recognize that this society has been built into a race-based caste hierarchy, but that doesn't mean I subscribe to the White Supremacist Ideology myself. That seems to be the essence of what you are expressing.

White supremacy is a lie, and a great evil. I do NOT accept it as a truth, and only see it as a tool of my enemy.

Mario Rossi - But most western countries didn't join slave trade and have nothing to do with Jim crow's laws. Seems to me you equate west with US. Besides the world is moving east but the differences still there, not only , even bigger.

Muhammad Rasheed - All Western nations participated in the slave-fueled economy. France, Britain, Portugal, and Spain operated the capture/distribution/labor cartel, while all the others invested by purchasing shares in slave taking companies, and the buying & selling of slave produced goods.

The other Western nations didn't literally implement the "Jim Crow" laws by name, but they all practiced discrimination/racist policies against Blacks as an ongoing legacy of the superiority complex developed from a culture that enslaved and exploited a people based on racial phenotypes.

Mario Rossi - Than even Africans states partecipated, and much more than many other western states. The investing in slaves companies was individual maybe, not by states, and most didn’t partecipate anyway.. most western counties didn’t have anything to do with slave trade.

Which racists policies against blacks you talk about? Do you have any reference or you just suppose so? Which superiority complex?

They weren’t enslaved based on racial phenotype, but simply because from weak countries, like it has always been.. there were slaves from central-north europe before for the very same reasons, and slaves even from europe for the same reasons.

Muhammad Rasheed - African nations participated in slaving in the traditional ways the practice was done throughout human history, and never because of race-based permanent chattel class delegation as established by the West. Western investing in slave companies was permeated throughout the entire interconnected greater European society as the slave-driven economy permeated all aspects of Western life. They were ALL invested in it whether they literally purchased shares or not.

The European racist policies that even now have Blacks discriminated against in those cultures. Those. Do you hold references for your offensive racism denial stance? My references can be found in the following sources:

1.) Documents Illustrative of the History of the Slave Trade to America 4 volume reprint; originally published 1930-1935

2.) Ebony and Ivy: Race, Slavery, and the Troubled History of America's Universities by Craig Steven Wilder

(Despite the titles, these two are comprehensive works that describe Europe's involvement as well.)

3.) History Ireland: The Irish and the Atlantic slave trade

European countries 100% targeted Africans based on racial phenotypes, built a race-based hierarchal caste structure, and deliberated avoided enslaving fellow White people. Whites participated in 'indentured servitude' programs that were nothing like the slave system.
Posted by M. Rasheed at 9:15 AM