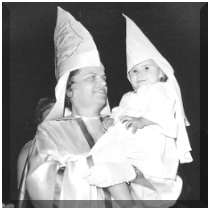 Muhammad Rasheed - Yes, it is 100% learned from careful indoctrination, taking both conscious and unconscious forms.

Willis Carto was a highly-influential White Supremacist who spread his propaganda throughout the South since the 1950s. Along with his strong activism and socio-political tracts, he also brought food and much-needed material resources for the poor Whites and the lower income working classes. This aspect of the White Supremacist movement mimicked the Black Panther Party, and the parent/child versions of the Nation of Islam (under Elijah Mohammed and Louis Farrakhan), in that they also brought their own empowering message with a package of resources for the poor.

The result in both cases is that the "normal average, middle class people" ended up with a casual sympathetic ear to many aspects of their group's version of an extremist message that each side has heard in their communities for generations. This is how the average White person can vehemently denounce the charge of "racist" while still expressing multi-layered sympathy for a figure like Dylann Roof. The average White person, at all class levels, is absolutely being indoctrinated in some form of White Supremacist rhetoric, without even being aware necessarily that that is the nature of their family creed (being passed along as "common sense values").

Alap Arslan - So do you have any particular experiences to elaborate on it?. I’m sure on the surface there are all the sweet smiles and black cop and white cop movies, and of ‘hawww don’t say the ‘n-’ word!” kind of gestures…but have you caught any father mother talk by accident?…(when they though nobody was listening)

Muhammad Rasheed - Even better. Check out these articles detailing the far-right's indoctrination techniques:

1.) I Was Trained for the Culture Wars in Home School, Awaiting Someone Like Mike Pence as a Messiah

Alap Arslan - Uh huh. You are missing the boat here.

I’m not discussing about ‘white supremist’ exclusive dudes. Just norml average, white midfle class prople. Those who are always nice on the uppermost layer with big fake smiles. Those who even sometimes hire one or two employees in the name of diversity…..but when they invite people to their homes for private dinners, its probably all white or asian or maybe latinos. OR when they talk with their dsughters they unknowingly quip with lines of “honey, you are white, and beautiful..you can be anything you want or do in this world” (as quoted by Tony Blairs sister in law who converted to Islam)….

These are very subtle teachings. Mostly overlooked but drill down to the core (unlike the stupid rants of supremists)

Because here, I’m not just discusssing white-black relations in only USA context (which has its own particular history) but ‘globally’.

Like for example, an Australian air hostess while delivering service to a white Afrikaan South African passenger on Emirates airlines, can be all smiles and chit chat a bit, compared to a stone faced expression if the passenger is a wellspoken Indian or Chinese, Turkish or middle eastern etc. Its like an automatic thing, which not even other communities show.

There was another incident, while I was sitting at a club with my Australian boss in Nigeria and he also had a white UK friend sitting with him and they spotted a Dutch or maybe Swedish guy passing by. They simply holler’d this stranger to come sit with them and to have a beer..and the stranger came and sat (and talked about his sexual exploits with the Nigerian ladies for half an hour!).

What I noticed as we sat there for almost every other day was, that they never extended invitation to any other dude of other race’s who used to walk by every other day but just started waving their arms to invite just the first white man they saw among a dozen other nationalities. Its minute, but its there.

Muhammad Rasheed - I can't see how a similar principle wouldn't be in effect among those groups in the Old World, since experiences color the mindset of the parents, who then pass along that thinking to the children. This is universal.
Posted by M. Rasheed at 4:39 AM